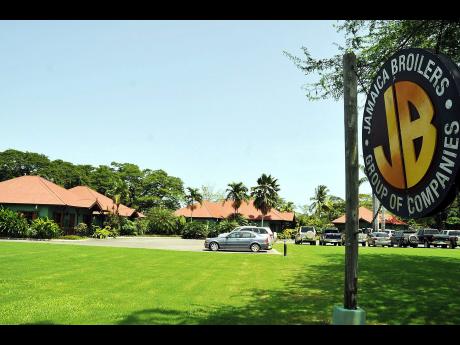 Jamaica Broilers Group (JBG), reported increased revenues of $8.93 billion for the first quarter, ended August 1, or 13 per cent more than the $7.89 billion posted for the corresponding period of 2014.

Of segment performance, the Jamaican operations reported $697 million in profits or $448 million over the $249 million for the corresponding quarter in 2014.

Segment revenue for the period stood at $6.7 million.

"The Jamaica operations performed well when compared to the prior year's quarter, which was negatively impacted by drought, market constraints and sluggish consumer demand," the company said in a statement appended to its unaudited first quarter results.

JBG further said sales volumes of its poultry and feed products increased for the quarter.

The US segment is now "at an optimal level," the company said of sales of fertile eggs to the industry.

With revenues of $2.6 billion, JBG said it expects "steady growth" in other product lines from the US segment.

Profit for the period stood at $266 million.

Haiti Broilers, which saw increased production and sale of table eggs, is now in command of 13 per cent of the market, up from the eight per cent it held at the same point in 2014, Jamaica Broilers said.

"The positive effect of this volume growth has however been neutralised by significant increases in operating cost, due to the depreciation of the Haitian gourde against the US dollar during this quarter," the poultry company said.

It means that the targeted period for Haiti Broilers to become profitable has been delayed.

Overall, the Caribbean operations reported a loss of $1.3 million, off revenue of $463 million.

"This segment was also impacted by impairment and mark-to-market adjustments, amounting to $44 million, on certain financial assets in two of our St Lucian subsidiaries," Jamaica Broilers said.