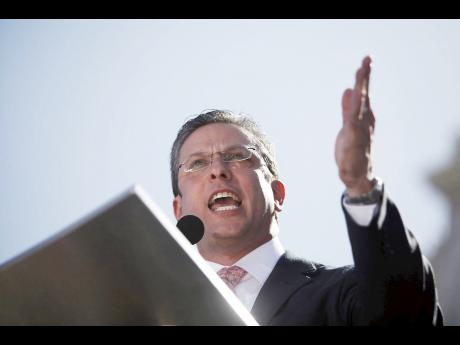 Puerto Rico is bracing for widespread spending cuts after the government released a long-awaited fiscal reform plan on Wednesday that would reduce much of the island's US$72-billion public debt and calls for restructuring the remainder at the expense of bondholders.

The five-year plan proposes that the government cut subsidies to municipalities and the University of Puerto Rico, offer early retirement and reorganise or merge state agencies. It also calls on the government to extend until 2021 legislation that would freeze new hires, salary increases and collective bargaining agreements.

Governor Alejandro Garcia Padilla acknowledged in a televised address that Puerto Ricans already have had to endure new taxes, an increase in utility bills and layoffs during a nearly decade-long economic stagnation.

"Our island faces an unprecedented fiscal and economic crisis," he said. "We have asked our people for many sacrifices."

During a background briefing late Tuesday, members of the group that worked on the plan said Puerto Rico's Government Development Bank would run out of money by the end of this year if action is not taken, and warned that the government would face a liquidity crunch next year if the plan is not implemented.

It is unclear how creditors and bondholders will react to the plan, which addresses only US$47 billion of the island's public debt and still requires approval by Puerto Rico's legislature and governor. Garcia has said the US$72-billion public debt is unpayable and needs restructuring.

Even if the plan is implemented, officials warned the government would still face a US$14-billion financing gap from 2016 to 2020, and that it would not be able to meet debt payments as scheduled because it could affect essential services. Officials warned that a compromise with creditors is needed to avoid what they called a disorderly default and legal morass.

"The plan itself will not get us out of the hole we find ourselves in," Garcia said. "It's time that creditors come to the table and share in the sacrifice."

One of the plan's main proposals is the creation of a control board, whose five members would be appointed by the governor but would take into account suggestions from creditors and potentially the federal government. The board would oversee implementation of the plan and have oversight of most public corporations, including the Government Development Bank, but not the power or water and sewer companies.

The group suggested that the board could impose sanctions, including a ban on entering into contracts, automatic expense cuts and automatic hiring freezes if the government does not comply with the plan.

Among the other proposals in the nearly 80-page plan are government investment in public-private partnerships, creation of an earned income tax credit, reduction of nominal corporate tax rates and a 10-year waiver from future minimum wage increases for workers younger than 25 to help increase the number of job offers. It also calls for further consolidation of public schools, with some 135 closures already implemented, as well as for subsidy cuts to municipalities to begin in 2018, while allowing cities and town to change their property tax structure and amend licence fees if needed.

The plan states that Puerto Rico should seek equal treatment from the US government regarding tax incentives and health-care reimbursements.

It is unclear how many of these suggestions would be implemented. Officials said they anticipate an intense debate in Puerto Rico's House and Senate and noted that 2016 is an election year.

The economic crisis has sparked an exodus of Puerto Ricans to the US mainland, with an estimated 144,000 people leaving the territory between 2010 and 2013. About a third of all people born in Puerto Rico now live in the US.