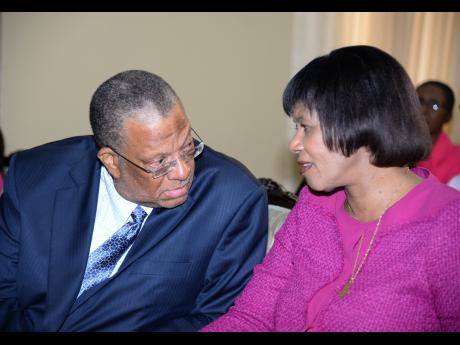 One of the most enduring and painful characteristic of the Peter Phillips-Portia Simpson Miller-led economic programme since the People's National Party took power in late December 2011 is the breadth and depth of taxation on people and businesses.

For sure, there are other areas of pain heaped on Jamaicans. Dr Fenton Ferguson's creaking and mismanaged health system is the in-your-face reminder - chik-V is one such ongoing calamity - while the fires and missing-in-action management at the Riverton dump and mismanagement-for-life water commission are others.

But the taxes initiated by the prime minister's chosen minister of finance have been pervasive, punishing and relentless.

There have been a plethora of taxes, cesses - which have been as offensive as stagnant cesspools - and levies.

As one turns around, the insatiable appetite of the minister of finance for more tax money to feed the insatiable IMF test-passing habit is demanding to be fed by yet a new tax with a novel name.

Meanwhile, taxpaying Jamaicans and many businesses get financially and physically punier and thinner from the squeeze around their taxpaying waists, necks and cash flows.

Nearly all groups and sectors are hurting but two, manufacturers and exporters, stand out.

NO GROWTH, NO JOBS

By and large, our local manufacturers have had a raw deal from this Government on the issues of ever-increasing taxes and support against aggressive and less-than-scrupulous Caricom competitors.

Earlier on in the current tenure of Mrs Simpson Miller's administration, her foreign minister, A.J. Nicholson, sounded a lot like an advocate for Trinidad & Tobago in a dispute involving our local manufacturers.

He had pushed his head so far out for Trinidad in an intemperate outburst in Parliament that on June 11, 2013 the Observer newspaper carried an article on his statement in the Senate with this headline: 'JMA to AJ Nicholson: Step aside, Minister'.

The JMA leadership was blunt and dismissive according to the article: "The Jamaica Manufacturers' Association (JMA) yesterday told Foreign Affairs and Foreign Trade Minister A.J. Nicholson to step aside or start singing a different tune on the trade dispute between Jamaica and Trinidad & Tobago.

"In a strongly worded reaction to Nicholson's outburst in the Senate on Friday against their criticism of Trinidad and Tobago's trade practices, the JMA said that the minister contradicted earlier statements by Industry, Invest and Commerce Minister Anthony Hylton, promising to take the trade issues as far as the Caribbean Court of Justice (CCJ), if necessary."

The brains of action PNP ministers were clashing. The JMA was not quite finished. In another terse sentence broadside, the JMA said: "Minister Nicholson has either forgotten which team he is on or blatantly disregards the people he is supposed to represent."

To highlight the minister's incongruous position on Trinidad - maybe that is charitable - it was also reported in the article that "Jamaica recently imposed $184 million in duties, as penalty, on lubricants imported from Trinidad under concessionary Caricom terms, which were suspected to have originating in Venezuela."

If a Jamaican exporter had done that, all of us would be called thieves.

Minister Nicholson seems to lead the pack in the Government who - given our lax approach to trade - lack understanding and do not get it that when we manufacture products in Jamaica and then export some to other countries, we create and keep jobs here and earn foreign currency to pay down our burdensome debt.

The Cocoa Board, the Coffee Board, the Trade Board, the Customs Agency and, of course, the mother ship of them all, Tax Administration Jamaica, find ways to tax manufacturers.

The Government has a strange approach to growth. It is really an aggressive anti-growth, tax-collecting strategy.

Given that we import such a large portion of our inputs into almost any product we make and, generally, making goods causes companies to hire people, the need for tax revenue seems to force the Government to tax most inputs multiple times.

Our manufacturers start off with a set of great disadvantages. There are import duties, GCT and a host of alphabet-soup-type taxes and cesses. The latest is the Environmental Levy, which is just a fancy name for another tax on manufacturing businesses - one that importers of finished goods do not have to pay.

The idea of facilitating the private-sector creation of manufacturing jobs in Jamaica is foreign to this Government. Then again, that should not be any surprise. The PNP administration emasculated the manufacturing sector in the 1990s and much of the rest they destroyed with Finsac.

Think of the conglomerate traders and how much of what they sell here is manufactured by employees in foreign companies and countries. Many would love to make goods here but the economic climate is extremely hostile, what with a senseless and costly energy policy and too many taxes on inputs.

The Government's policy is much more accommodating to the importing of finished products.

The Government better listen up. It won't be long before many who manufacture any products here will simply outsource the jobs and skills to overseas manufacturers and import finished products, which they will brand and sell to Jamaicans who are becoming poorer and more jobless.

That will continue to take us from dwindling prosperity to poverty.