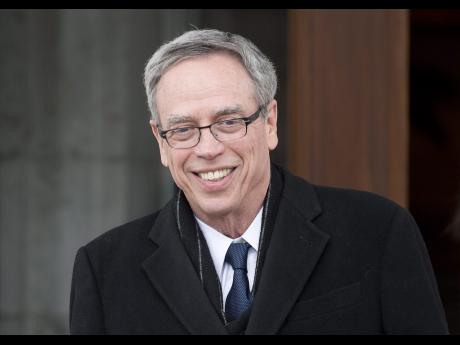 Joe Oliver said in an interview with The Associated Press the downturn was largely confined to the energy sector. Canada fell into a recession in the first six months of the year, dragged down by falling energy prices and economic troubles in China.

The Canadian economy retreated at an annual pace of 0.5 per cent from April through June after sliding 0.8 per cent the first three months of the year. Two consecutive negative quarters are the technical definition of a recession.

"We don't believe that the economy was, in fact, in a recession," said Oliver, whose Conservative party is seeking re-election on October 19.

"We're really talking about a contraction in the energy and resource sector of the economy, which is less than 20 per cent of the economy. Granted, there is a spillover, but the other 80 per cent was growing."

Oliver noted the economy grew at a 0.5 per cent pace in June, the first monthly gain in six months. He said whether Canada was in recession is a matter of continuing debate.

"But I can tell you this, we don't believe we're in a recession at all now," Oliver said. "The trade numbers are robust. Consumer confidence is good and we returned a budget surplus."

Canada is the world's 11th-biggest economy and the United States' biggest trading partner. The Canadian economy suffered far less damage from the financial crisis and Great Recession than its southern neighbour. But news this month of a recession spelled trouble for Prime Minister Stephen Harper. Polls show the election is a three-way toss-up. Harper is campaigning for a rare fourth term on a record of economic growth.

Beata Caranci, chief economist for TD Bank, said the Canadian economy did technically contract in the first half of 2015 but the job and housing markets held up well, and she said forward indicators show Canada is looking at a "pretty nice rebound.

Craig Wright, chief economist at the Royal Bank of Canada, called the first half of the year a "soft patch" rather than a recession and said conditions have improved. "You are looking at a 0.1 per cent drop on a two-trillion economy. It's kind of a rounding error and it may be revised away," Wright said.

Oliver, however, said they are mindful of the external risks to the Canadian economy.

According to a government memo prepared for Oliver on the global economy, the trade impact on Canada of a more prolonged slowdown in China would be significant, noting China is Canada's second-largest export partner, with exports equivalent to roughly one per cent of Canadian GDP.

But Oliver said the global economy is not in crisis like it was in 2008 and said Canada does not need the stimulus spending the opposition Liberals in Canada are advocating. The Liberals vow to invest in infrastructure to get the economy going and say they will run deficits of CDN$10 billion (US$7.5 billion) in each of the next three years if elected.

Canada posted a budget surplus after six straight years of deficits. The government earlier this month announced a CDN$1.9 billion (US$1.4 billion) surplus for last year.

Oliver, who met with finance ministers and central bank governors from the Group of 20 leading economies in Turkey earlier this month, said other countries could learn from Canada.

"The contrast is very clear. When I was sitting around the table in Ankara, I couldn't help but think that if some of these other countries that we are talking about had followed our path of low taxes and balanced budgets, they wouldn't be in the difficulty they are today," Oliver said.

"We're in a period of growth and we're anticipating our surpluses to get larger in the years ahead."

Andrew Thomson, a finance minister of the Canadian province of Saskatchewan and the opposition New Democrat candidate running to defeat Oliver, disagreed.

"The facts don't lie," Thomson said. "Mr Oliver is in denial that Stephen Harper's plan has failed. New Democrats have a plan to make targeted investments in manu-facturing, transit and infrastructure. With prudent economic leadership, we can do that within a balanced budget framework."