David Jessop | The Pope and the Caribbean 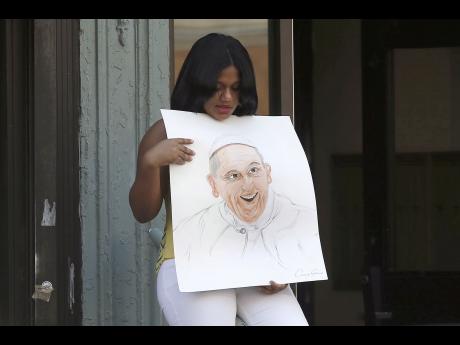 AP
An onlooker holds a portrait of Pope Francis as she waits for him to leave Our Lady Queen of Angels School, Friday, September 25, 2015, in New York. (AP Photo/Jason DeCrow)

The meeting, from November 30 to December 11, will be the largest since 2009 when a similar attempt in Copenhagen failed, only to be followed by recriminations among the developed world, advanced developing nations, and those countries most at risk, over who was to blame.

Since then, the process has moved on, and the positions of many nations, most notably the United States and China, have become closer. One general reason for this is that the two countries, among many others, have since the Copenhagen summit, agreed to regulations, policies or laws that now enable them to make specific pledges on how they are going to cut greenhouse gas emissions, rather than the non-specific approach taken in 2009.

Despite this, agreement in Paris is not assured. There remain many difficulties over the draft text, with participants in the most recent negotiations in Berlin, expressing concern about the slow and convoluted process, given that the meeting in Paris is just under two months away.

More significantly, there remain hard to reconcile issues relating to long-term finance, and how to differentiate obligations.

Although developed nations have affirmed their commitment to providing annually up to 2020, US$100 billion for climate change financing, the details will only be revealed at the World Bank and International Monetary Fund meetings in early October, and the post 2020 level of commitments have yet to be agreed.

Differentiation of obligations between developed and developing nations also remains unresolved. While Europe and the US want an approach that would see all national commitments converge, China and India are arguing for an alternate differentiated approach.

Other issues still to be addressed include, uncertainty about the criteria that will be applied for at-risk nations like those in the Caribbean and Pacific when it comes to climate-related loss and damage; a matter that was highlighted by the recent damage caused to Dominica by tropical storm Erika. There is also disagreement over ending the use of fossil fuels such as coal by 2050, a measure opposed by China, India and others.

More worryingly still, reports suggest that when all of the national pledges have been submitted, the cut in global emissions may be around three degrees celsius; not enough to meet the projected global target of two degrees celsius, let alone the 1.58C, or lower that the Caribbean is hoping for.

Climate change has become an issue like no other. Despite the continuing sometimes angry debate about whether global warming is man-made or cyclical, it has also become a much broader moral issue related to inequity, development and the role of capital in a globalised economy.

In this context, it is striking that in the last few days, how in different ways, this aspect of climate change has been highlighted by both President Obama and President Castro, using language driven by the common presence in their nations of a visitor able to speak from the standpoint of morality. In both nations, Pope Francis was able to demonstrate through his words and writing that social justice and equity require a compatible moral response from the world when it comes to climate change.

"I find it encouraging that you are proposing an initiative for reducing air pollution," Pope Francis told President Obama at the White House.

"It seems clear to me also, that climate change is a problem which can no longer be left to a future generation. When it comes to the care of our 'common home', we are living at a critical moment of history. We still have time to make the changes needed to bring about a sustainable and integral development, for we know that things can change," he said, quoting his recent encyclical, Laudato Si.

He also told the US Congress: "Now is the time for courageous actions and strategies, aimed at implementing a culture of care and an integrated approach to combating poverty, restoring dignity to the excluded, and at the same time protecting nature."

It is an approach summed up in recent comments made by the Indian Prime Minister Narendra Modi, when he called for a change in language from "climate change to climate justice" because of its disproportionate effect on the poor.

As this column has previously observed, climate change is an issue on which the Caribbean has every reason to have its voice heard and be taken very seriously.

The science apart, for most citizens, the circumstantial evidence is powerful. A severe drought is affecting most of the region, nations are introducing water rationing, there is the likelihood of crop failures in Haiti, tropical storms and sea surges are becoming more intense, and other manifestations such as flooding, abnormally high temperatures, sargassum seaweed, and coral bleaching can be observed in every nation from the Bahamas southwards to Suriname and French Guiana.

Not only is 50 per cent of the region's population and the majority of its productive enterprise and infrastructure within 1.2 miles of the sea, but its low lying nature and its fragile ecosystems demonstrate the danger of a change in sea level, making its voice central to influencing international opinion to its own and to the world's advantage.

A little earlier this month, Caribbean climate change negotiators, ministers and regional experts met for three days in St Lucia the country has lead responsibility within CARICOM for climate change and sustainable development - to establish a single coherent position to take to Paris and to deploy in preparatory meetings. The meeting, organised in collaboration with the Belize-based Caribbean Community Climate Change Centre, focused on areas of convergence and divergence in the negotiations, ahead of the meeting in Paris in December.

Let us hope that the voice of the Caribbean will be heard loudly in the coming months, and it is able, with other small island states, to convey the nature of the common threat.

nDavid Jessop is a consultant to the Caribbean Council.