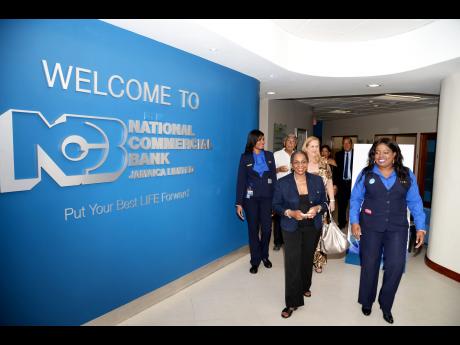 For Michael Lee-Chin, pride in the achievements of the faltering bank he acquired in 2002 was much in evidence on Thursday night.

At the opening of a new financial centre in Kingston, Lee-Chin said his confidence in National Commercial Bank Jamaica Limited (NCB) had paid off - quoting poetry in the course of his address, which extolled the virtues of confidence over fear - and invited other Jamaicans to similarly invest in assets in Jamaica.

In the year that Lee-Chin purchased the bank from the Jamaican government, it had $115 billion of assets on its balance sheet.

The bank broke the $10-billion barrier in annual net profit in 2009, and in NCB's six fiscal periods since then to September 2014, it has racked up a combined $65 billion of profit.

"If someone told you 13 years ago that they saw an economy growing less than half of one per cent per year, two debt exchanges within two years, interests rates fluctuating between 80 per cent and six per cent; and on and on, [and said] Mr Lee Chin, do you still want to buy the National Commercial Bank, what would you have said?"

"No!" he answered himself, as he addressed the opening of the new NCB Financial Services Centre in Kingston.

"But that is the experience we have had over the last 13 years. Yet, over the period, NCB, with your support, has grown from strength to strength. Our market share, with your support, has gone from 24 per cent to 54 per cent. Our competitor, which was picking at NCB's carcass in 2002, their market share has gone from approximately 54 per cent to around 36 per cent," said the NCB chairman.

INVESTING IN THE ISLAND

The new 20,700 square-foot banking and financial centre - developed by the bank at Constant Spring Road in proximity to a similar centre developed by rival Scotiabank Jamaica - cost over $1 billion to construct, said Lee-Chin. Three hundred jobs were created during construction, and the commissioned centre is staffed by 73.

The bank chairman said that within the last 13 years, NCB had paid more than $30 billion in taxes, and invested more than $1 billion in socio-economic projects.

He invited others to invest in the island, saying it's all about confidence.

"If you were confident when we had the last debt exchange that we would have passed, with flying colours, the last nine quarterly IMF strict tests, what would you have done then that you did not do. Would we all not have said 'Jamaica is on a great trajectory, let me make sure I do my part by buying a piece of Jamaica, buying assets, buying more stocks, investing more in the country'?" said the bank chairman.

"We can learn from our experiences, learn from the experience of NCB - it's all a matter of having confidence," he said, having quoted from his favourite poem, his anthem - Our Greatest Fear by Marianne Williamson.

NCB transferred its two Manor Park branch operations as well as the private banking unit formerly housed at The Atrium in New Kingston to the NCB Financial Centre, which opened for business on August 31.

The ground floor also houses a new bank branch, with an attached 'Bank on the Go' section.