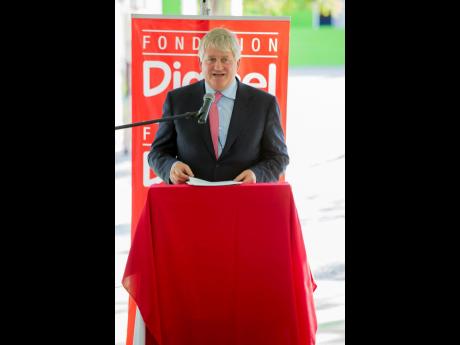 Telecommunications carrier Digicel Group has become the first mobile telephone operator to start blocking advertisements from Google, Yahoo and Facebook on its network.

Digicel does not appear to be against the ads in principle, but wants a piece of the business, and seems to be making a play to nudge the powerhouse companies to the table.

As such, the telecoms and its billionaire owner Denis O'Brien, have called for them to consider revenue-sharing arrangements.

Asked the value of the ads that flow through its network from Google, Yahoo and Facebook, and how big a share the telecoms was going after, Digicel Group spokeswoman Antonio Graham said Thursday that it was "commercially confidential information".

The push is similar to the stance taken by the telecoms against voice over Internet protocol/over-the-top service providers that have not signed licensing deals with Digicel while utilising its network to deploy their products.

Digicel Group is currently positioning to go public via the New York Stock Exchange with a potential US$2-billion IPO, to be priced at US$13 to US$16 per share.

The pushback regarding network ads telegraphs that Digicel considers itself big enough to take on the big guns of the tech world.

As to whether any of the companies had shown a willingness to negotiate, Graham said Digicel has not had discussions with any of them as yet.

"That said, this is a long-standing issue and one where the companies involved have spoken by their actions and by their inactions, which persist despite criticism from a wide range of stakeholders, including network operators," she told the Financial Gleaner.

The company said it would be deploying ad control technology at the network level across its 31 markets in the Caribbean and South Pacific, in partnership with Israeli start-up Shine Technologies, to ensure a better experience for its 13.6 million subscribers and to encourage Google, Facebook and Yahoo to help connect the 4.2 billion unconnected people across the globe.

"This is about giving customers the best experience and about getting access to broadband to the unconnected and allowing them to benefit from the opportunities it affords," declared O'Brien, Digicel's founder and chairman.

"Companies like Google, Yahoo and Facebook talk a great game and take a lot of credit when it comes to pushing the idea of broadband for all, but they put no money in. Instead they ... trade off the efforts and investments of network operators like Digicel to make money for themselves. That's unacceptable, and we as a network operator are taking a stand against them to force them to put their hands in their pockets and play a real role in improving the opportunities for economic empowerment for the global population," he said.

In a release on Wednesday, Digicel said ads used up as much as 10 per cent of a customer's data plan allowance and blocking them would allow subscribers to "browse the mobile web and apps without interruption from unwanted advertising messages".

Digicel said it will start deploying the ad control technology in Jamaica, where the telecoms maintains its headquarters, and roll out to its other markets in the Caribbean and South Pacific in the coming months.

The telecoms said in its release that it is the first operator worldwide to deploy the technology at the network level. Shine's technology blocks display and video ads inserted by ad networks in both mobile browsers and apps.

"Digicel is looking to companies like Google, Yahoo and Facebook to enter into revenue-sharing agreements with it so that this money, in turn, can be reinvested in network deployment and, ultimately, the bridging of the digital divide."

The company said that currently the companies do not pay to make use of its network and the services they provide "suck up bandwidth to make money for themselves through advertising while putting no money in".

Latest figures from the International Telecommunications Union state that 43 per cent of the global population now has some form of regular access to the Internet, but there are still some 4.2 billion people who do not. In the least developed countries, a very low one in 10 people have access.

Digicel noted that broadband has proved to be transformative in both developed and developing countries alike promising to improve people's lives, as per the United Nation's sustainable development goals, and in line with that network operators across the world are investing billions in deploying state-of-the-art networks.