Kremi to double throughput under second round of investment 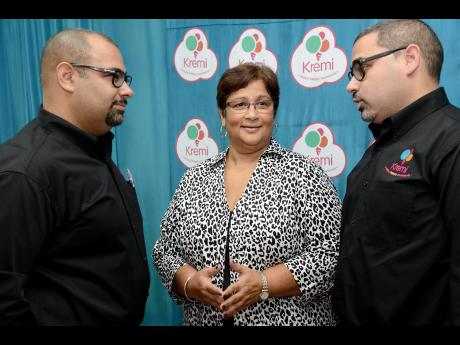 Caribbean Cream Limited, which trades as Kremi, wants to capitalise on recent gains from monies spent to refresh the business and add manufacturing capacity, by investing in another expansion round.

This time, however, the investment of $100 million will be a third of the $300 million already spent on plant and machinery.

"All are aimed at lowering expenses in one way or another," Chief Executive Officer Christopher Clarke told shareholders at Tuesday's annual general meeting.

The ice cream company is already realising the benefits of last year's upgrades. Its May first-quarter sales climbed 15 per cent to $289 million, while profits jumped 138 per cent to $39.2 million.

Part of the recent upgrade was the introduction of a new blast freezer system that uses ammonia rather than other refrigerants. The increased efficiency of that cooling system has given Clarke the idea that Kremi can do more with the heat energy that is dissipated into the atmosphere.

"It is possible that we can use the energy to heat water that can be used in our pasteurisation and sanitation processes. This should speed up our production, lower the use of LPG and lower our use of chemicals that we use to clean and sanitise," he told shareholders.

The $100 million being invested this year is meant to double hourly throughput of the mixing plant as well as the rack storage space. This is in addition to the hot-water system and a new wastewater system that must pass muster with the state authorities in order to be commissioned.

"Apart from the engineering work, we need the necessary approvals from the National Water Commission, NWA and NEPA. We just have to go through a lot of government agencies," Clarke said.

He is hoping to wrap up the project in time to capitalise on Kremi's peak period.

"The racking, the upgraded mix plant and the hot water are all expected to be done by December this year. We want to be sure to get that done before the peak Christmas period," Clarke told the Financial Gleaner after the meeting.

The increased capacity in the mixing plant will boost hourly throughput from 200 gallons to more than 500 gallons. The upgrade will allow it to combine ingredients faster to make its ever-growing range of ice cream flavours.

Clarke is laying down an aggressive timeline in terms of when he will fully realise the gains from the plant improvements.

"I expect most of them to have a payback period of under a year," he said.

"The hot-water system will certainly be less than a year. The racking system - it is less clear because of the various elements - will be under three years. What we are sure of is that the increased storage will lead to increased sales and it will lead to smother operation at the factory, since there will be more space for the finished product to go," the ice cream maker said.

The upgraded cold room can hold 8,000 cases of product, but the additional racks will more than double that capacity to 17,500 cases.

Pressed on the potential technical challenges from the increased storage, Clarke insisted that the upgraded cooling system should be able to handle the increase.

"It should be a little more pressure, but not a lot. Remember, the cooling system cools a room. The ice cream coming from the blast freezer should already be hard, so it shouldn't put additional stress on the room because it doesn't have to work to harden the ice cream," Clarke reasoned.

The investment in Kremi's growth programme since it went public two years ago extends beyond the plant.

Clarke reported to shareholders that the company has been spending more on advertising and marketing and has gone as far as to incentivise vendors.

"The amount of locations selling Kremi products have doubled from about 450 to over 900 locations," he said.

The board faced questions over the non-payment of dividends since it raised about $69 million on the junior market of the Jamaica Stock Exchange in May 2013.

Clarke, supported by non-executive director Wayne Wray, appealed for patience, saying that profits raised now should be reinvested to promote growth and, ultimately, a bigger payday.