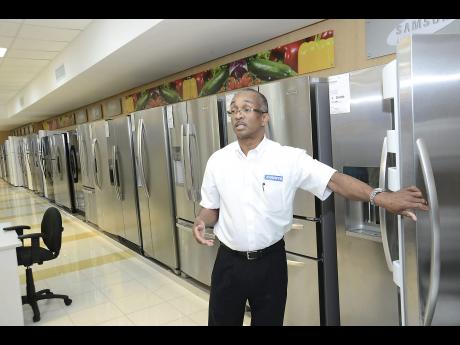 The owner of the Courts retail furniture chain has pumped US$8 million ($960 million) into expanding its distribution centre located off Spanish Town Road.

By increasing the site's capacity to handle, store and process inventory by 50 per cent, Unicomer Jamaica will realise tremendous efficiency gains, according to the company's managing director, Dennis Harris.

"Having more inventories in one location gives us greater capacity for growth," he told Wednesday Business in a phone interview. "Historically, we have to rent space."

The company established its distribution centre in the Three Miles area of Kingston with 30,000 square feet about 15 years ago. Five years later Unicomer quadrupled the space. The latest addition increased the total square footage to 175,000, or by 35 per cent.

However, reconfiguration of older space; the addition of racks which raises the height at which inventory can be stored; and "lots more equipment", such as forklifts, essentially boost capacity by half.

"We also created new offices for staff, a spray booth to repair slightly damaged furniture, and a technical service shop which has technicians on hand to assess and fix possible faults in items we have sold," said Harris.

The container yard was also expanded just in time for the company's peak season, which sees Unicomer receiving some 65 per cent of the 1,200 containers it handles annually.

Unicomer currently has 29 Courts stores nationwide, but the company has seen most of its growth under its five-year old Lucky Dollar brand, which now has 10 outlets.

"When we looked at where the market was going, and at the needs of people with lower disposable income, we felt the need for this segment, which has become a lower-cost operation retail business," said the managing director.

The company also went into optical - eyewear and tested lenses. It now has eight stores, while plans to expand this business line are well advanced.

For Courts, Unicomer is focusing on enhancing existing stores and improving customer experience, according to Harris.

"Given the tough economic environment, we don't see the need to increase the footprint for Courts at this time," he said.

An important part of that programme is the installation of LED lighting and solar photovoltaic (PV) systems across select stores.

The Constant Spring Road location near Half-Way Tree was the first to see a PV system installed. This was followed by May Pen, Portmore and Mandeville. The distribution centre and the Courts store in Cross Roads are also being upgraded with systems expected to be commissioned within a couple of months. Another will be installed at the Linstead outlet shortly thereafter.

"On average, we are looking at 65 per cent (electricity) coverage at these locations," Harris said of the PV systems. "Our LED investment is wider - it extends across another nine locations."