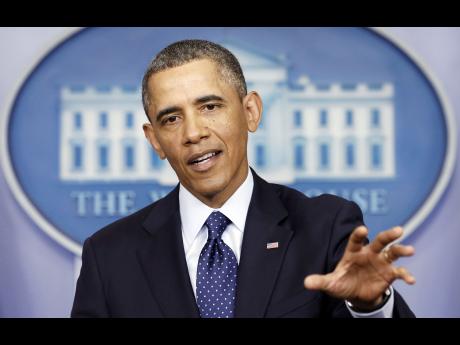 The United States and 11 other Pacific Rim countries reached a contentious trade pact that cuts trade barriers, sets labour and environmental standards and protects the intellectual property of multinational corporations. Now each country must sell the deal to sceptical lawmakers.

Together, the countries account for 40 per cent of world economic output.

Trade unions and other critics say the deal will expose workers to more foreign competition and cost jobs.

President Barack Obama says it will provide American businesses and workers with access to new, fast-growing markets. He says the deal will provide a fair shot and level the playing field.

The pact still has to clear Congress. A vote isn't expected until next year.

The president spoke to reporters Tuesday at the Agriculture Department. He promoted the deal while meeting with agriculture and business leaders.

For President Obama, sealing the trade deal after marathon talks over the weekend in Atlanta is a major victory on a centrepiece of his international agenda. It is also a welcome boost for Japan's Prime Minister Shinzo Abe and his efforts to jolt one of the world's biggest economies out of two decades of stagnation.

"This partnership levels the playing field for our farmers, ranchers, and manufacturers by eliminating more than 18,000 taxes that various countries put on our products," Obama said in a statement Monday. "It includes the strongest commitments on labour and the environment of any trade agreement in history, and those commitments are enforceable."

The deal has been negotiated for a decade and has faced opposition in many countries. It was unpopular with protected industries such as textiles, agriculture and autos in Japan, the United States and other nations. Medical groups were

concerned by a US push to extend the patents of drugs that would limit access to life-saving medicines in poor countries. Opponents also feared that procedures for resolving disputes between corporations and governments could undermine the sovereignty of states.

Business risk consultancy Eurasia Group said it expects every country to eventually approve the deal despite it being contentious. It said Canada's upcoming election is a key hurdle as Canadian participation will be in doubt if Prime Minister Stephen Harper is not re-elected.

"The deal is politically charged in many of the participating countries, but now that it is struck, we expect it to be ratified across the board," said Eurasia Group's Sean West in a report.

Alan Bollard, executive director of the 21-nation Asia-Pacific Economic Cooperation group, said the trade agreement can still go into effect even if parliaments in some countries refused to ratify it. Countries that were not part of the negotiations, such as South Korea, might also join up later.

Eurasia forecasts that the pact will add US$285 billion to the combined gross domestic product of the 12 countries by 2025 and increase exports within the bloc by US$440 billion.

In percentage terms, Vietnam gets the biggest boost in GDP while, in absolute terms, Japan has the most to gain, it said. China, which is not part of the agreement, would lose some trade opportunities.

Referring to China, Japan's Prime Minister Shinzo Abe told a news conference in Tokyo on Tuesday that the agreement is a new trade system that strengthens the economic rule of law for the member countries that share principles such as democracy, basic human rights and freedom.

"If China joins the system in the future, it would greatly contribute not only to Japan's national security but also the stability of the Asia-Pacific region," he said.

In the US, Obama has pursued the pact against the objections of many lawmakers in his own Democratic Party and, instead, forged rare consensus with Republicans.

Obama has cast the agreement as good for Americans workers and crucial to countering China and expanding US influence in Asia.

The president has to wait 90 days before signing the pact, and only then will Congress begin the process of voting on it. As a result, a vote likely will not happen until well into 2016, where it is likely to get ensnarled in the politics of a presidential election year. Congress can only give the deal an up-or-down vote. It cannot amend the agreement.

Peter Petri, a professor of international finance at Brandeis University, says he doesn't expect the deal to lead to any US job gains. But he forecasts it will boost US incomes by US$77 billion a year, or 0.4 per cent, by 2025, mostly by creating export-oriented jobs that will pay more, even as other jobs are lost.

A key target for opponents was drug companies' efforts to protect some of their products from cheaper foreign competition.

US drug makers wanted 12 years of protection from competitors for biologics, which are ultra-expensive medicines produced in living cells. Critics say blocking competition from near-copies drives up drug prices and makes them too expensive for people in poor countries.

Drug companies didn't get the dozen years they wanted; they got about eight years of protection.

Judit Rius Sanjuan, legal policy adviser to Doctors Without Borders, said in a statement that the pact "will still go down in history as the worst trade agreement for access to medicines in developing countries".

Critics also worried that the deal would enable multinational companies to challenge national laws in private tribunals on the grounds they inhibit trade, undermining public health and the environment.

The trade ministers gathered in Atlanta said the pact has safeguards that prevent "abusive and frivolous claims and ensure the right of governments to regulate in the public interest".