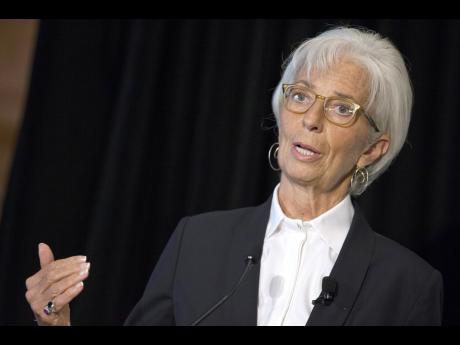 The International Monetary Fund (IMF) on Thursday urged the United States to adopt reforms to give emerging markets a bigger say at the international agency and enhance the participation of low-income countries.

IMF Managing Director Christine Lagarde said implementation of the 2010 reforms remains an imperative for the Fund's credibility and legitimacy.

"It is also crucial for ensuring efficient permanent resources to effectively meet members' needs and support the stability of the international monetary and financial system," she told a press conference where she presented her global policy agenda ahead of the IMF and World Bank annual meetings.

"We want it to take place," Lagarde emphasised, noting that if the reforms are not ratified soon the IMF executive board will discuss interim steps, although those would not substitute for the United States Congress' endorsement.

Separately, the IMF said the biggest risks to the global economy are now in emerging markets, where private companies have racked up considerable debt amid a fifth straight year of slowing growth.

Top bank official Jose Vinals says the Fund estimates "that there is up to US$3 trillion in overborrowing in emerging markets" while presenting the IMF's Global Financial Stability report on Wednesday.

The IMF board began considering alternatives after the US Congress missed the September 15, 2015 deadline to ratify the reforms agreed since 2010.

The US, the largest member of the IMF with a current quota of SDR 42.1 billion (about US$65 billion), must ratify the package of reforms for it to enter into effect.

Under the reform programme, once effected, the US would see its quota decline marginally.

On December 15, 2010, the board of governors, the IMF's highest decision-making body, approved the package of far-reaching reforms of the Fund's quotas and governance.

Once implemented, it will result in a 100 per cent increase in total quotas and a major realignment of quota shares to better reflect the changing relative weights of the IMF's member countries.

Among other benefits, the doubling of quotas would shift more than six per cent of quota shares from over-represented to underrepresented member countries.

Lagarde, whose five-year term as IMF managing director expires in July next year, asked whether this could be her last annual meeting and if she would consider pursuing a second term, said:

She declined to say whether she has been canvassing the 188-strong member states to appoint her for a second term.

Lagarde said the Fund has continued to refine its core activities and is adapting to support the membership as they face multiple challenges of the ongoing transitions in the global economy.

Among those is China's transition to more consumption-driven growth without activity slowing too much, while reducing high debt levels through an orderly deleveraging, and moving towards a more market-based financial system, which will have implications for its trading relationships with foreign countries.

Another important transition, both for the US and global financial markets, is the US embarking on what has been described as the most telegraphed yet unprecedented process of increasing policy rates for the first time in nine years.