Red Stripe sale among priciest for a Jamaican company 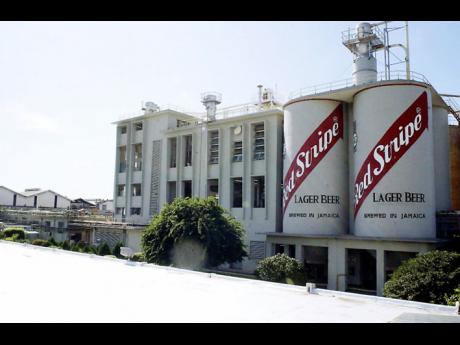 Heineken's purchase of Red Stripe falls just shy of the priciest acquisition of a Jamaican company.

The near US$730 million value the Dutch beer giant placed on the Jamaican brewery was only exceeded by the US$780 million effective price Trinidad-based CL Financial paid for Lascelles deMercado - the former owner of J. Wray & Nephew - in 2007. Incidentally, Italy-based Gruppo Campari paid US$415 million for the rum company five years later.

But the deal brewing now represents a 340 per cent premium on top of the trading price of the beer maker on the day London-based spirits company, Diageo, completed the sale of its 58 per cent stake in Desnoes & Geddes.

Heineken, which now owns 73.3 per cent of Red Stripe, says it will offer to buy out the remaining shareholders at the same price, then delist from the Jamaica Stock Exchange.

At US$0.259 per share, the purchase price is also equivalent to 37 times earnings, which is not unprecedented for the Dutch brewer.

It paid US$5.6 billion for a stake in Asia Pacific Breweries (APB) in 2012, when the purchase price represented a premium of 54 per cent over the one-month volume weighted average price per APB share and a price-to-earnings multiple of 35 times. Then, as is now, the deal was considered to be strategic for aligning Heineken's assets in important markets.

"This transaction is mutually beneficial and will allow both parties to concentrate their resources in the individual markets, while at the same time providing a framework for ongoing, long-term cooperation," said Heineken of the transaction.

It allows them to increase focus on their respective beer businesses and certain licensing arrangements in Jamaica, Malaysia, Singapore and Ghana, the company added.

It also brings more of its manufacturing under direct control in line with its business strategy over the past five years. In 2009, over 22 per cent of Heineken's beer was manufactured through joint venture and licensing agreement. Today, less than 10 per cent is outsourced.

"As majority owner, Heineken will be able to drive the investment and strategic direction of the operating companies in Jamaica and Malaysia," said Heineken CEO Jean-Francois van Boxmeer. "The Caribbean and Southeast Asia are strategically important for Heineken."

The Americas - which include the United States, Latin America and the Caribbean - has become Heineken's most important market segment. Over the past five years, beer volumes sold to that geographical area rose from 12 per cent of the Dutch brewer's output to 28 per cent today.

Volumes to Asia Pacific also grew by 67 per cent, although that market segment just represents 12 per cent of total sales.

A major contributor to the shift in the Americas was the acquisition of the beer businesses of Fomento EconÛmico Mexicano (FEMSA) in 2010. This gave it access to two of the world's largest beer profit pools - Mexico and Brazil.

Heineken has since been tidying up its portfolio in the Caribbean. It increased its shareholding in Brasserie Nationale d'Haiti (Brana), the country's leading brewer, from 22.5 per cent to 95 per cent. The brewer also sold its 9.3 per cent shareholding in Cerveceria Nacional Dominicana (CND) in the Dominican Republic for US$237 million to a subsidiary of Budweiser beer maker Anheuser-Busch InBev in 2012.

Along with a 42 per cent stake in CND that it bought from the controlling family of the Dominican brewer for US$1.1 billion, InBev effectively put a US$2.5 billion price tag on the company. In 2012, CND recorded just over US$90 million in earnings, which implies a price-to-earnings multiple of 28 times.

The Americas also represent a major growth market for InBev. Its volumes sold to the region remained flat over the last five years, but that was due to a decline in North America. Taken alone, Latin America sales volume grew by five per cent since 2010, although that pales in comparison to the 64 per cent growth in volumes it experienced in Asia Pacific.

SAB Miller - the maker of Coors beer - also saw its lager sales volume in Asia Pacific surge by 54 per cent since 2010 to become its most significant market in 2014, representing 29 per cent of its sales. Latin America grew by 14 per cent, and is now comparable in size with Europe and North America, which both registered declines in beer consumption.

Diageo, which is primarily a spirits company and which contributes to less than two per cent of global sales volumes of beer with its popular Guinness brand, will hand over distribution of its products in Jamaica to Heineken, having bought Desnoes & Geddes in 1993. Then it paid US$62 million for a 51 per cent stake in the company. Then the brewer also owned considerably more assets.

In 1999, it sold its soft drinks business, which represented about 11 per cent of its revenue at the time, to Pepsi Americas. That year, Red Stripe also offloaded its wine and spirits business to Lascelles and sold its five per cent stake in Antigua Brewery Limited for EC$750,000.

In 2013, it sold its five per cent stake in Brana, which was 95 per cent owned by Heineken by then, and its 10 per cent shareholding in Windward & Leeward St Lucia, for a total value of US$9.3 million.