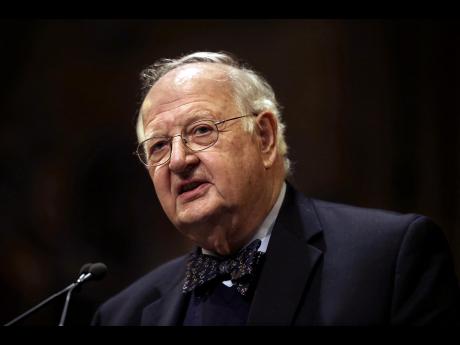 AP
Angus Deaton speaks at a gathering at Princeton University after it was announced that he won the Nobel prize in economics for improving understanding of poverty and how people in poor countries respond to changes in economic policy Monday, October 12, in Princeton, New Jersey.

Angus Deaton has dug into obscure data to explore a range of problems: The scope of poverty in India. How poor countries treat young girls. The link between income inequality and economic growth.

The Princeton University economist's research has raised doubts about sweeping solutions to poverty and about the effectiveness of aid programmes. And, on Monday, it earned him the Nobel prize in economics.

For work that the award committee said has had "immense importance for human welfare, not least in poor countries," Deaton, 69, will receive a prize of 8 million Swedish kronor (about US$975,000) from the Royal Swedish Academy of Sciences.

Deaton's research has "shown other researchers and international organisations like the World Bank how to go about understanding poverty at the very basic level," said Torsten Persson, secretary of the award committee.

He becomes the sixth scholar affiliated with Princeton to win the Nobel in economics since it was first given in 1969.

"That lightning would strike me seemed like a very small probability event," Deaton said at a news conference at Princeton. "There are many people who are worthy of this award."

Deaton grew up in a family of modest means.

"Not having money can give you a perspective on the world that you don't get other ways," he said. "Most people in my family thought I should be out (working) in the fields, not reading books. Fortunately, my father didn't think that way."

For Deaton, who was born in Edinburgh, Scotland, and holds dual US and British citizenship, everything starts with an analysis of data.

"Thinking about numbers hard is one of the things I think is really important," Deaton told The Associated Press.

Deaton created tools that let governments in poor countries study how families adjust spending in response to, say, an increase in the sales tax on food.

"He's an economist's economist," said Dani Rodrik, a Harvard colleague. Deaton has done "very careful, detailed work" on data about poverty at the household level in poor countries "so that one could understand the effects of changes in policies on how people behave", Rodrik said.

Deaton discovered that India had far more poor people in rural areas than previously thought, a finding that led the government to expand subsidies.

"Households that were not defined as poor before can now be reached," said Ingvild Almas, associate professor at the Norwegian School of Economics. "That is a direct result of Deaton's research."

He also hit upon what the Nobel committee called an ingenious way to discover whether families in poor countries spent less to care for daughters than for sons. Among other things, he studied how much households spent on "adult" items, such as beer and cigarettes, to see whether families consumed things differently depending on the sex of newborn children.

His surprising conclusion: They didn't.

Another Deaton study challenged the once-popular notion that malnutrition caused poverty by making people too weak to find work. He found the relationship worked the other way: Being poor caused people to be malnourished.

Deaton is physically imposing. "He has football-player dimensions," said David Warsh, who writes the Economic Principals blog. And he isn't reluctant to voice strong opinions.

"He's been very much forthright in his criticism of facile solutions ... the development economics' equivalent of a get-rich-quick scheme," said Daron Acemoglu, an economist at the Massachusetts Institute of Technology. "His work is based on being meticulous at every stage."

In his 2013 book, The Great Escape, Deaton expressed scepticism about the effectiveness of international aid programmes in addressing poverty. He noted, for example, that China and India have lifted tens of millions of people out of poverty despite receiving relatively little aid money. Yet, at the same time, poverty has remained entrenched in many African countries that have received substantial sums.

"If this is the only thing you read about aid, you will come away very confused about what aid does for people," Gates wrote on his blog last year.

Deaton has criticised the widening income gap between rich and poor in the United States. But he has not become a darling of anti-inequality activists the way another Nobel-winning economist, Columbia University's Joseph Stiglitz, has. That may be because his views on inequality are complicated.

In The Great Escape, he wrote that "inequality can sometimes be helpful" in promoting prosperity by giving people incentives to work harder and more efficiently.

But last year Deaton wrote that he worried that high-paying jobs in finance and other fields were diverting talented young people from "more worthwhile pursuits".

He also warned that the very rich might be using their disproportionate influence to "write the rules in their favour".

Monday's announcement concluded the selection of this year's Nobel winners. The economics award isn't among the original prizes created by Swedish industrialist Alfred Nobel in 1895. it was established generations later as a memorial to him.

Deaton, who spends part of his summers fly fishing in Montana, told the AP that he has no big plans to celebrate.

"I'm just hoping it's not a dream which I'm going to wake up from," he said.