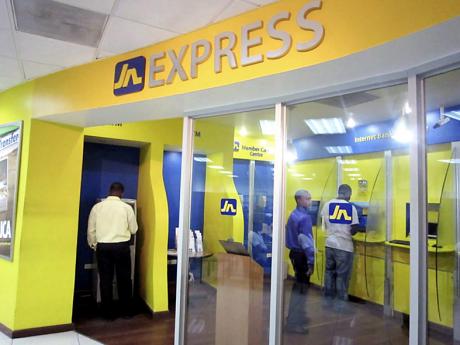 File
Customers use the JN Express hall at the Jamaica National Building Society's Half Way Tree branch in Kingston. The mortgage bank is to become a full-fledged commercial bank.

Jamaica National Building Society (JNBS) and its 11 businesses are to be placed under the umbrella of three different holding companies as the 140-year-old society transitions to a commercial bank.

The branch network to evolve from the restructuring programme developed by JN will likely replicate the current 34 locations, which includes 15 building society offices as well as JN MoneyShops spanning 14 parishes, Jamaica National said on Wednesday.

JNBS General Manager Earl Jarrett also previously disclosed that a newly acquired property at 8 Belmont Road in New Kingston is to be transformed into a branch that would serve as a personal banking centre mainly for big clients.

The building society got approval this month to convert to a bank, after seven years. The application was first submitted in 2008, and resubmitted in November 2013 to align with changes under the banking reform programme. The Bank of Jamaica finally signed off on the application in March 2015, indicating it had no objection. The minister of finance's approval came six months later.

"The minister's approval gives JNBS clearance to commence the legal process of the conversion, which will include the incorporation of the three holding companies proposed to separate risks, in keeping with the Banking Services Act," the mortgage institution said through its communications department.

The restructuring will eliminate the building society, but membership will be preserved in the mutual holding company.

JNBS needs the approval of its membership to proceed with the conversion, after which it will initiate a court-ordered scheme of arrangement, in accordance with the Building Societies Act, to convert to a commercial bank.

The date for the vote on demutualisation is yet to be scheduled.

At the end of the process, it is expected that the commercial banking licence will be issued.

The institution was primarily created to encourage savings towards home ownership. With $127 billion in assets, Jamaica National will immediately become the third largest of seven commercial banks, behind National Commercial Bank Jamaica and Scotiabank Jamaica, and ahead of Sagicor Bank Jamaica, which swallowed the operations of RBC Royal Bank Jamaica last year.

The commercial banking sector, which has six players now, was last valued at $852 billion by assets at June 2015.

For Jamaica National, the value of its loan book at June was $57 billion, while its savings deposits amounted to $89 billion.

The rebranding of JN Group will get under way when the commercial banking licence is granted, but the mortgage company has not said when it finally expects to have the licence in hand.

"The commencement of operations will be dependent on the length of time to complete the legal process," JNBS said.

Outside of Jamaica and Cayman, the group has offices in Florida, United States; Toronto, Canada; and London and Birmingham in the United Kingdom.

Another $82.6 million was used to acquire the property at Belmont Road.

"As a commercial bank, JN will be able to legally offer certain types of loans and banking products which it cannot offer as a building society. These include chequing accounts and personal loans," said JNBS's communications office.