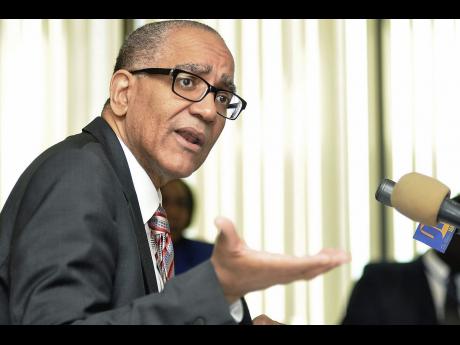 Bank of Jamaica Governor Brian Wynter is urging local banks to pay more attention to their reporting protocols and regulatory requirements under anti-money laundering/counter-financing of terrorism (AML/CFT) rules, saying it would help to ease pressures being applied by American correspondent banks.

At the same time, the central bank governor is implying that foreign banks do not appear to be acting entirely on concerns about compliance, but may have a financial motivation.

The correspondent banks are sidestepping business with some sectors seen as vulnerable to money laundering - referred to as 'de-risking'.

Money-services companies and the local banks that serve them are most affected. Jamaican and regional authorities have now acknowledged that the de-risking strategy could end up harming economies if unchecked, and the multilateral agencies are also weighing in.

"Recent developments with respect to actions of Jamaica's US correspondent banks have created concern for us, with the most recent development being the notice given by a major correspondent bank that is the principal provider of foreign currency banknotes services to Jamaica, and it gave notice that it will stop accepting cash emanating from cambio operations," Wynter said.

He was apparently referring to the actions of Bank of America, as reported on in August, which has forced the foreign exchange trading cambios to seek out non-cash means of surrendering cash to the central bank.

Addressing the fourth Annual AML/CTF conference in New Kingston on Tuesday, Wynter said Jamaica is not unique in the problems being encountered.

"We've also seen de-risking actions in overseas jurisdictions disrupting the operations of remittances to Jamaica in some cases. These developments are part of a wave of de-risking that is spanning the globe, and they do not appear to be related to any assessment or judgement of Jamaica's AML/CFT regime," Wynter said.

The central bank chief also told the conference that the de-risking phenomenon is not entirely motivated by non-compliance concerns, but may have more to do with business decisions by the foreign banks.

"It seems that it is being driven by assessments by US banks that the revenues from this business, this correspondent business line, with their correspondents in Jamaica are exceeded by the costs of the business, especially by high compliance and the high risks involved," Wynter posited.

The rate at which foreign banks are de-risking is becoming an existential threat for financial institutions as soon they will not be able to do business outside of their home countries, he added.

Jamaican officials have reached out to the US authorities, but the latter seem reluctant to interfere with the private decisions of private interests, Wynter said, adding that the issue is being described as strictly commercial or, otherwise, very complex.

Jamaica will have to do more to ensure that its financial system is resilient and adheres to best practices, in the meantime, he noted.

"We need to step up our monitoring and compliance in relation to money laundering and the financing of terrorism. The 'we' I speak of is (not only the central bank) but you as participants in the industry, who are on the front line in this issue," said the BOJ governor.