No shortage of eggs for Christmas 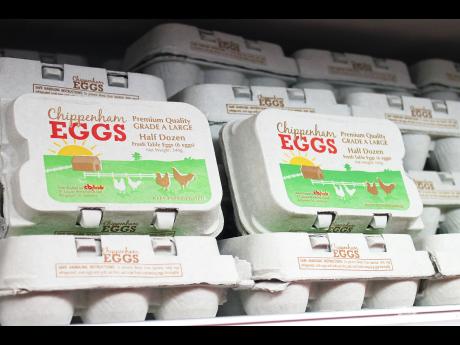 Cartons of Chippenham Eggs are displayed on a grocery shelf

Consumers will have no difficulty getting eggs for the traditionally high-consumption Christmas holidays this year, producers say.

With more layers having been placed in production coming out of a near yearlong scarcity of eggs, Caribbean Broilers Group's corporate affairs manager, Dr Keith Amiel, and Jamaica Egg Farmers Association (JEFA) president, Roy Baker, say the industry has fully recovered and neither expects any issues leading up to the holidays.

"Inventories are high. Farmers are still busy building inventory to ensure that we have a smooth Christmas," Baker told Wednesday Business even as he bemoaned the current state of the market, which, he said, is characterised by "weak" demand.

The country experienced a shortage of the protein up to earlier this year, a spillover from 2013.

The shortfall was directly linked by players in the sector to an oversupply in 2012, which saw many local farmers opting out of the industry.

The scramble was further compounded by other market conditions, such as a tax on table eggs that was introduced in 2013, but later revised and the increased cost of business that threw off the planning period for farmers.

To counter the supply-demand gap and bring the industry back to equilibrium, the top two local pullet producers, Jamaica Broilers Group and Caribbean Broilers, supplied some 150,000 pullets to farmers with the latter supplying 60,000.

"The new layers that would have been put into production between May and June would have started laying 22 weeks payer and peaked 30 weeks later deliberately, so as to have a large quantity of eggs from now going into Christmas," Amiel said.

Farmers also traditionally get the highest price for their produce in Christmas, Amiel further noted of the need to balance the supply-demand equation.

The JEFA president said the egg production for 2015 should close out at about 141 million or 13 per cent more year on year.

Production for last year stood at 125 million, he said.

"The last time that we have produced more that 141 million eggs was about eight years ago, with the exception of 2012 when we had that terrible glut," he said.

The increased local production is taken up by exports to Trinidad and other Caribbean territories with the JEFA and Caribbean Broilers now major exporters.

Since June, the JEFA has exported roughly 60,000 dozen eggs to Trinidad, Baker said.

Caribbean Broilers itself has shipped five trailers and is set to increase supplies to regional buyers owing to a shortfall for Christmas in Barbados and Trinidad, Amiel said.