Jarrett: There is good business in doing good 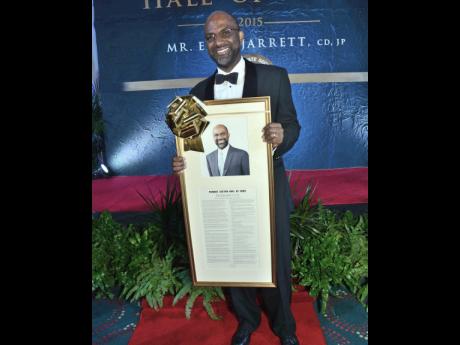 Ian Allen
Earl Jarett, general manager of Jamaica National Building Society, shows off his citation shortly after he was inducted into the Private Sector Hall of Fame at The Jamaica Pegasus hotel in Kingston on October 28, 2015.

"Profit with a purpose equals development equals growth" has been his personal philosophy, which he quoted on Wednesday night on his ascension to the Private Sector Hall of Fame as the 23rd inductee.

Jarrett has been general manager of the Jamaica National Building Society (JNBS) since October 1999, having joined the institution in 1997 as executive with responsibility for compliance and overseas subsidiaries.

He has presided over growth at Jamaica's largest building society from $17 billion of assets to $160 billion, and is now leading its transition to a commercial bank.

The conversion will result in JNBS becoming the third largest commercial bank in Jamaica, behind NCB and Scotiabank.

The citation from the Private Sector Organisation of Jamaica (PSOJ), which was read as Jarrett received the award, noted that he seemed to have "discovered the formula for successfully fusing brilliant corporate service with selfless philanthropy, building businesses, while improving the lives of many in the various communities he has served".

Jarrett, in his pronouncements, sought to align business growth with social transformation and development.

"I am of the firm belief that the outcome for Jamaica can be changed. If I'm to be successful, then it means that Jamaica must be successful and, if we lose the essence of business as connecting communities and connecting people, I think we will have lost it," he said, as a pre-recorded video highlighted aspects of his growth as a businessman and the breadth of his philanthropy.

There is a long list of 18 organisations both philanthropic and statutory to which Jarrett is attached. He is listed as having leadership roles in at least nine of them. He is involved, for example, with the Jamaica Cancer Society, the Jamaican Diaspora Foundation and University of the West Indies Mona Campus Council.

Jarrett feels it is through this type of involvement that people like him can make a difference.

"For whatever reason, I am cast in a spot where it's part of my responsibility to support these ideas and to create ideas sometimes," he declared.

He also lamented the trust deficit in Jamaica that is a feature of relationships across sectors.

"This low level of trust actually holds us back as a nation as we find it difficult to come to a common agreement on many important issues. It also reduces our confidence in sharing; it promotes selfish behaviour and the thoughts behind this," Jarrett said.

Time and effort are often wasted to disprove good ideas, he adds.

Jarrett feels that Jamaica, in this atmosphere of distrust, is really operating at half of its potential.

"To me, it's like flying a jet with just half the engines engaged. You will never achieve full power or maximum power," he said.

The PSOJ honouree says a starting point for building trust is the sharing of power and decision-making.

He sees a bigger role for the private sector in governance, saying right now business voices are under-represented in both houses of Parliament.

"If we agree that private businesses and industries account for over 90 per cent of employment, then it would be useful for an equivalent level of greater participation in Parliament from the business sector than currently exists," Jarrett said.

The PSOJ Private Sector Hall of Fame started in 1992 under the leadership of Dennis Lalor, who was himself inducted in 2006.