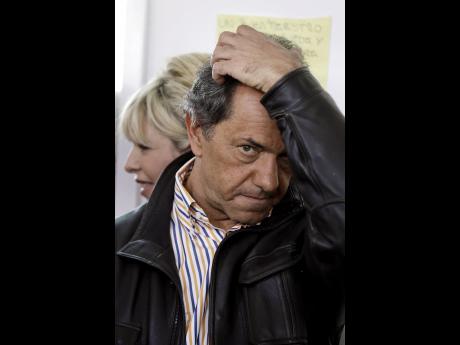 AP
In this Sunday, October 25, 2015, photo, ruling party presidential candidate Daniel Scioli arrives to cast his vote in Tigre, Argentina. His wife, Karina Rabolini, is in the background. Scioli garnered 37 per cent of the votes, compared to 34 per cent for Mauricio Macri.

Pundits often argue that polls are more of an art than science. If that's the case, pollsters must be in a creative rut.

Last year, they failed to predict the outcome of the Scottish Referendum. Last week, all of them, except for one small company, failed to anticipate the strong performance by former Buenos Aires Mayor Mauricio Macri during the Argentine presidential elections.

It's not clear what is leading to the mistakes. The problems could be methodological.

Statisticians claim that pollsters rely too much on fixed-line telephone interviews. It is easy to obtain the socio-economic dispersion of residential fixed-line owners. However, such information is almost non-existent for cellular users. The problem is that fixed lines are being replaced by cellular phones. Others argue that voters are keeping their cards close to their vests, and not expressing their true intentions until they are at the ballot box.

Whatever the case, Argentines clearly expressed their displeasure with the current set of policies. As a result, more than 60 per cent of the population voted against former Governor Daniel Scioli. He lost most of the polling districts in his home province of Buenos Aires. He also failed to win the large grain-growing provinces such as Entre Rios, Santa Fe, Cordoba and San Luis. It was clear that the electorate wanted change.

Instead of banding together, the Scioli camp splintered as soon as the results were announced. There were scathing recriminations against the Campora, the Peronist youth movement. Some said that the senior leadership was more focused on dividing the spoils of government positions rather than campaigning.

Sensing a sinking ship, many mayors and local officials immediately began switching sides. There was a rather vague attempt at damage control. Overtures made to the Massa camp were swatted away.

Ever since he had declared his candidacy, the former chief of staff for President Cristina Fernandez was belittled and criticised by Scioli and his followers. The press reported that former Economy Minister Roberto Lavagna, a member of the Massa camp, had been offered a return to his old position. However, he dismissed the approach.

Scioli even agreed to participate in a televised debate, even though he refused to join a similar exchange a month ago.

Given his desperate condition, there are rumours that he may throw in the towel before the next round of run-off elections. That is what former President Menem did in 1999, when he was running against Fernando de la R?a. Menem's rejection rate was so high he knew he could not win.

People are turning their focus to Macri as prospective leader of Argentina.

Macri's approach will be macroeconomic shock therapy. He promises to float the currency and remove energy subsidies soon after his inauguration.

Led by a team of brilliant economists, Argentina will restore its links with the international financial community. It will revive its relationship with the IMF and World Bank, settle with the bond holdouts and return to the international capital markets.

The outgoing administration will try to pass him a poisoned chalice. Huge distortions hobble the Argentine economy. Although international reserves are said to be about US$27 billion, the central bank's coffers are really empty.

The last source of liquidity has been swap lines tendered by the Chinese in order for the government to remain afloat.

To stem a run on the currency, the central bank has been selling dollars forward. The contracts, which are settled in pesos, trade well below the dollar-blue market, creating a huge arbitrage opportunity. With open interest of more than US$12 billion, it is also an enormous contingent liability for the government, once the currency is devalued.

The assortment of landmines that the Fernandez administration left behind will be a formidable challenge for whoever wins the election.

It is true that Argentina is about to embark on a change of direction that will allow it to return to its former spot as one of the great economies of Latin America, but a lot of work and perspiration lie ahead.

It will be very painful for most households, corporates and investors. Yet, one essential element will be working in the government's favour. For the first time in the nation's history, the Province of Buenos Aires, the city of Buenos Aires and the federal government will be ruled by the same party. This will imbue the executive branch with an overwhelming capacity to overcome most obstacles.