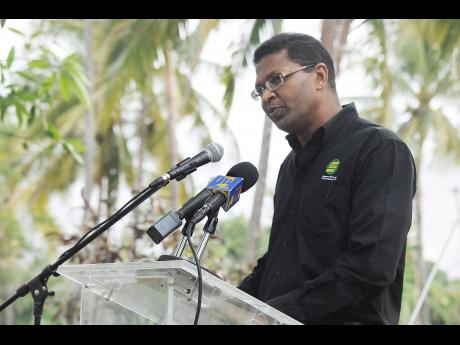 Seprod CEO Richard Pandohie is shrugging off third quarter losses as the expected result of ongoing restructuring of the company's struggling sugar arm.

The group reported a loss of $41 million in the July-September period, compared to $189 million of profit the previous year.

Pandohie said the loss was understandable in light of the triple effects of redundancy payments, asset revaluation and low revenues from sugar.

Seprod Limited, through its subsidiary, Golden Grove Sugar Company shelled out over $140 million in redundancy payments to about 500 workers in its farming and sugar manufacturing operations.

Additionally, the prolonged drought dealt a big blow to the total value of the assets at Golden Grove, he said.

"Remember now it's a bio asset that is classified like any other agri-product. With the drought, what we found was that as we got lower yields there were less assets available, so we had to take a lower valuation since the expected yield from the cane was less than what we budgeted," the Seprod boss said.

Amid the restructuring of Golden Grove, Pandohie took command of the sugar operation and is now attempting to steer it back to profitability. So far he has overseen the revamping of process flows and the acquisition of new machinery.

"We've gone through the whole process, looking at the machinery and so on. I'll be personally staying close to this one to see it through," he said.

To mitigate losses, Seprod has outsourced the agricultural side of its operations. Pandohie formally confirmed that a family-owned company with roots in Westmoreland is the new partner.

"Yes, it is official, the Sankar group who operate in Westmoreland will be partnering with Seprod to take care of the field operations. In fact they have already started," he said.

The Sankar group has a similar arrangement with Pan Caribbean Sugar Company, the Chinese operators of the Frome Sugar Factory in Westmoreland.

Seprod has blamed, in part, the centralisation of sugar distribution for the underperformance of its sugar operation since the company entered the sector in 2009, having racked up losses of just under $3 billion over the years.

The company will now be selling its own branded sugar and has a team pounding the pavement to open up sales channels in Jamaica and overseas for the product.

"They're operating both in Jamaica and Caricom in preparation for when we start production in mid-January and when we hit the shelves at the end of that month," the Seprod CEO said.

Biological assets for the Seprod were

Pandohie said lower cane yields also hit the group's revenue stream. This resulted in the company absorbing higher than expected losses based on the amount of sugar produced.

Seprod's bad third quarter also shrank nine-month profit from $1 billion last year to $447 million in the current period, but the company expects to recover lost ground in the fourth quarter.

"September was very good and between October and December we expect strong results that should allow us to cover those losses easily and end the year as planned," Pandohie said.

Sales revenue for the group dipped in the third quarter but was relatively flat at $11.2 billion over the nine months.

Pandohie says the group, which manufactures industrial items, sugar, foods and beverages, held steady at the top line for two reasons: the 30 per cent cut in prices on Seprod's Cool Fruit beverage, which drove up volume sales; and the distribution deal with GraceKennedy that has improved its export sales.