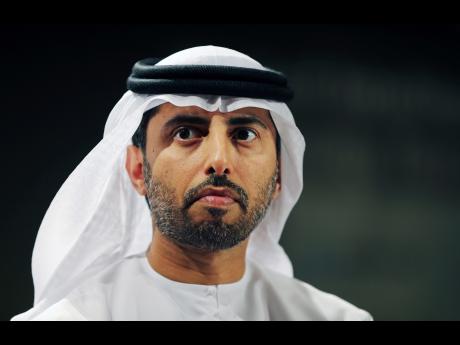 AP
In this Tuesday, January 13, 2015 file photo, Suhail bin Mohammed al-Mazroui, UAE Oil Minister listens during his appearance at the 6th Gulf Intelligence UAE Energy Forum in Abu Dhabi, United Arab Emirates. The Emirati energy minister said he believed prices would rise in 2016, even as he said his country planned to ramp up production to 3.5 million barrels of oil a day from a current 2.9 million. (AP Photo/Kamran Jebreili)

On stage only a short time after the United Arab Emirates said it would increase its oil production despite low worldwide prices, the oil and gas minister of neighbouring Oman didn't pull any punches.

"This is (a) man-made crisis in our industry we have created. ... And I think all we're doing is irresponsible," Mohammed bin Hama al-Rumhy said as his Emirati counterpart forced a smile next to him.

Even among friends, the bottoming out of oil prices, which are down more than 50 per cent since the middle of last year, has strained both budgets and relationships across the Gulf and other oil-producing countries.

And while Emirati officials

at the annual Abu Dhabi International Petroleum Exhibition and Conference said Monday they believed prices will head back up into next year, others offered a more pessimistic view.

"It's a movement of an era of scarcity to one of abundance; it's a movement from a world of unexpectedly strong demand and tight supplies to a world of ample supplies - even oversupplies - and weaker demands," said Daniel Yergin, vice-chairman of IHS and the author of a Pulitzer Prize-winning book on the history of oil.

"OPEC's not the only balance of the market. The United States is back in the role of swing producer, a role it hasn't exerted in six decades," he said.

Fluctuating oil prices are nothing new, but this time the US has found itself roaring back into the industry with the mass production of shale oil and reduced dependence on imports.

US shale, a weakening economy in China and other factors have pushed prices down. On Monday, Brent crude, a benchmark for international oils, was at US$47.63 in London, down from well over US$100 a barrel last year.

While the US production has dialled back because of low prices, even more oil will soon enter the market, including an expected flood of Iranian exports once sanctions are lifted under a landmark nuclear deal.

Despite that, the Emirati energy minister said he believed prices would rise in 2016, even as he said his country planned to ramp up production to 3.5-million-barrels of oil a day from a current 2.9 million.

The Emirates was the world's sixth-largest oil producer in 2014, according to the US Energy Information Administration. That 3.5 million barrel production will come in the "next two to three years," said Abdulla Nasser al-Suwaidi, the director-general of the Abu Dhabi National Oil Company.

"We are hopeful that we will see in 2016 ... a correction," Emirati Energy Minister Suhail Mohamed al-Mazrouei said. "Don't ask me how big; that's for the market to decide. Don't ask me who is going to play that role. It's not going to be OPEC only. This is an international effort. Everyone has a role to play."

But speaking in Qatar at the same time, Saudi Prince Abdulaziz bin Salman bin Abdulaziz, deputy minister of petroleum and mineral resources, cautioned against making too many cuts amid the swing in prices.

"As we saw back in 2008, high oil prices proved to be unsustainable, and the price fell sharply following the great financial crisis. But this works in the opposite direction," the prince said, according to a copy of his speech carried on the state-run Saudi Press Agency. "A prolonged period of low oil prices is also unsustainable, as it will induce large investment cuts and reduce the resilience of the oil industry, undermining the future security of supply and setting the scene for another sharp price rise."

None of that placates al-Rumhy of Oman, whose country is the biggest Mideast oil producer outside of OPEC with around one million barrels a day. Oman has been highly sceptical of OPEC, led by Saudi Arabia, which has kept its own production high, further depressing prices.

"It's like you and your wife at home, cooking for 10 people and you eat a little bit and the rest of it you throw it in the dustbin," al-Rumhy said. "I cannot justify that, that this loss is by the grace of God. This loss is because we are not responsible. ... We are waiting for the cyclone that is hitting us to change course. And it will not happen."

His comments drew sustained applause in Abu Dhabi, with his Emirati counterpart responding that the low prices are everyone's responsibility. Yet even afterwards, surrounded by reporters, al-Rumhy kept up his criticism, while smiling and saying: "They're my friends."