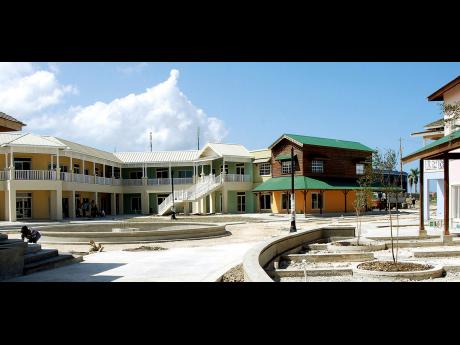 Sheena Gayle
A section of Whitter Village Aas senn during its construction in October 2009.

Angella Whitter, widow of Joe Whitter and executrix to his estate, is moving ahead with plans to shore up tenancy at Whitter Village, having settled a lawsuit with the former RBC Royal Bank Jamaica over a US$21.65 million debt owed by Ironshore Construction Company.

With the matter "settled in our favour", Ironshore Construction is now re-entering the market, said Whitter's attorney Adley George Duncan.

"In other words, Ironshore Construction is back in business," he said, referencing plans to ready the property for new tenants.

Ironshore Construction was the vehicle through which landowner Joe Whitter developed the expansive shopping complex at Ironshore in Montego Bay. The company in 2007 had obtained a loan from RBC, which turned to the Supreme Court last year to force Angella to clear the debt amid an ownership transition. RBC Jamaica was sold in early 2014 by Royal Bank of Canada.

Asked the terms of the settlement, which was finalised around July of this year, Duncan said "RBC was paid out" and that Ironshore no longer had an obligation to its former banker, but gave no other details.

"With RBC out of the picture, the management of Ironshore Construction Company is now at liberty to reorganise and push to continue the development as envisioned by Mr Whitter," he said.

The lawyer at DunnCox who represented RBC Jamaica in the case was said by the law firm to be off the island and that no one else could comment.

RBC Jamaica was acquired by Sagicor Group and merged into the company's existing commercial banking arm, Sagicor Bank Jamaica, in June 2014. The acquisition included the assets, but not the outstanding debts.

Angella Whitter says she is now moving ahead with plans to position empty shops at Whitter Village for the market. A third of the complex is vacant. Sagicor Bank is on-board as a financier, she added, but declined comment on how big a loan Ironshore Construction has taken from the bank, saying "this is nobody's business."

The company also plans to raise capital from the sale of land to pay off outstanding debts "and to move quickly to rent the shops at the Whitter Village," Duncan said.

Despite the settlement of the lawsuit, Whitter Village is still not debt free but, said Whitter, "we have refinanced the project with Sagicor and we are moving ahead with the project and going back into the marketplace to compete".

Commercial space remains vacant in the complex, but Whitter points to deals with two new clients as a sign that a turnaround is imminent.

But now Whitter Village has "restructured its financial affairs and placed itself in a position to continue executing its property development strategies along the Ironshore corridor," she added.

Whitter said 62 of the 92 shops are now occupied and the other 30 are available for rent, lease or sale.

One of the new shop owners at the Village is real estate firm Coldwell Banker Jamaica Realty, marking the company's expansion to a second office in Montego Bay. Its first is located at the other end of Montego Bay at Montego Freeport.

"We think its a very well laid out shopping centre and eventually it's going to become the town centre for that side of Montego Bay, so we thought it was prudent to invest early," said Andrew Issa of Coldwell Banker.

Fast food giant KFC Jamaica has also just closed sale on a plot of land next to the Village complex to "develop a stand alone outlet," said Issa, whose firm handled the sale.

The lots are being sold from a five-acre plot abutting Whitter Village, added Duncan, who said plans "are at an advanced stage to develop the commercial properties".

"At this stage, it is more than a proposal; there have been agreements," the lawyer said.

Whitter Group has also partnered with "a real estate investment group to reposition the Whitter Village in the marketplace and execute plans to develop several residential and commercial properties in the group's portfolio," Whitter said but did not name the partner.

Issa said Coldwell Banker is the selling and marketing agent but not the partner referenced by Whitter.

Whitter Village is centrally located in the resort corridor between the Sangster International Airport and Rose Hall. Some of the operations that have taken space in the complex are the United States Embassy's western office, a Progressive supermarket, Payless shoe store and Harley-Davidson Jamaica.