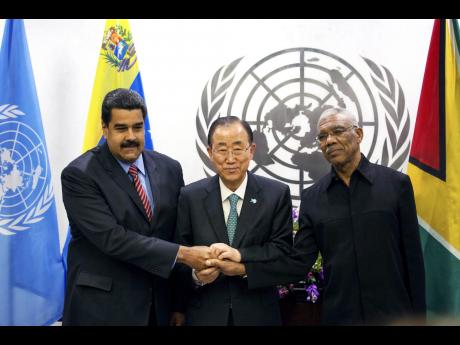 In geopolitics, it is the long game that matters. It is, therefore, not surprising that Guyana's President David Granger and Venezuela's President Nicolas Maduro met separately in Riyadh with Saudi Arabia's King Salman Bin Abdulaziz in Al Saud when they attended recently the fourth summit of Arab and South American countries.

In part, the interest of both men was in Saudi Arabia's decision to continue pumping oil in quantities that will maintain its global market share, but with the effect that world energy prices will remain low. It is a decision that touches the strategic interests of many states from Iran to Russia as well as non-state actors like ISIS.

For President Maduro, a return to much higher oil prices would not only improve his country's economic fortunes, but also facilitate the expansion of PetroCaribe-related programmes across the region.

Any significant increase in

the price of oil would also

offer the opportunity to promote his alternative social thinking, change hemispheric relationships, and broaden resistance against what Caracas regards as ideological and economic pressure from the United States and multinationals.

For this reason, the global oil price, and what follows from it, is set to become a central strategic component in the Caribbean's future relationships; whether in respect of PetroCaribe, its allied development aspects, the export of natural gas from the US, the encouragement of alternative energy, and new finds of offshore oil and gas.

For this reason, the border dispute with Venezuela can, in some respects, be seen as a proxy for more significant changes taking place globally that are altering the balance of power and have long-term implications that are not always well understood.

This may also not augur well for healing divisions in an increasingly divided Caribbean.

In a recent statement, President Granger, when asked if he believed Venezuela was attempting to undermine his country's ties to CARICOM, suggested that Caracas had been trying to do so for the last 40 years.

"We will continue to take a principled stand, principled position on the territorial matter," he said. "We will also continue to work with our Caribbean colleagues; we expect them to be true to their word. They gave us their support at the last Heads of Government meeting in July, and I expect that that support will not fail," he was quoted as saying.

However, despite President Granger's confidence, it is hard to remember a time other than when the US invaded/intervened in Grenada in 1983, when the Caribbean found itself potentially conflicted over a matter as important as the sovereignty of a regional nation.

While Caribbean diplomats point out that Caribbean views would change rapidly should any incursion take place and that Caribbean solidarity would prevail, it is far from clear where, in practice, the line

will be drawn given the

rapidly deepening economic importance of Venezuela's economic role in the region and in particular with the Eastern Caribbean and with Trinidad and Suriname.

Emphasising this recently, the Guyana Chronicle noted that CARICOM's less-than-emphatic support for Guyana "brought into focus the viability and survival of that regional body and the difficulties of balancing regional integration with the sub-nationalism".

It also astutely observed that the region had developed separate political identities that now served to obstruct robust regional integration. While on some issues, CARICOM, it said, had been able to reach a consensus, the process was being influenced by the ability of nations to withstand pressures from powerful countries with which they have bilateral economic and political relations.

"That pressure is two-way direct: pressure from the powerful country, and self-induced pressure aimed at protecting economic benefits," it wrote in an editorial.

What the publication was reflecting was the impact of the appearance over the last decade of the new range of external actors now present in the region - China, Venezuela, Brazil, Russia, the Gulf States, and others, in addition to the US and the Europeans - at a time when much of the region has not lost its habit of dependency.

Although the fault lines within the region are not in themselves ideological, they speak to a world in which relationships have become so changed as to bring into question the region's future ability to take unified decisions on both strategic and building-block issues.

The border disputes with Venezuela - and Suriname's now reactivated claim - are among a number of hard-to-resolve divisions emerging in the region.

They include the absence of any willingness to address the decision to all but break off diplomatic relations with a Cariforum member nation, the Dominican Republic, despite many of the facts and the reality on the ground not fitting the unchallenged rhetoric within CARICOM; the virtually ignored decision by Haiti to ban the export of 23 staple products by road from the Dominican Republic; and the recent motion passed by the country's powerful business leaders, CONEP, calling on government to create an Economic Forum of Hispanic Caribbean, with Venezuela, the Central American nations, Mexico, Cuba, and Puerto Rico as members; the purpose of which would be to counterbalance CARICOM.

Beyond this, the list is extensive and space does not permit detail, but there are unresolved tensions over the absence of a single relationship with China; how the questions of reparations should be approached; a manifest failure in CARICOM to defend what is economically and culturally important, namely the region's rum industry; different approaches over the use of ganja; recognition of the CCJ; the failure to agree on a single Caribbean candidate for Commonwealth Secretary General; and a whole host of less central issues and contradictions touching on foreign relations.

In other parts of the world, one might see these as problems that can be resolved, but in today's fragmented me-first CARICOM, caught between US materialism and Fabian socialism, it is no longer easy to see any regional basis for resolution, let alone implementation of solutions.

Any reasonable person might, therefore, conclude that the range and depth of the divisions that now exist, imply that there is little hope of the Caribbean ever again being able to address issues as a whole, other than perhaps on matters that are life-threatening, in the sense of any regionwide threat to security, health, and climate change.

While the world, too, is now largely issues-driven and takes an ‡ la carte approach to resolving problems, the sense is that even when it comes to geostrategic issues, the Caribbean's fading unity of purpose is allowing those outside to once again become the drivers of the region's future.