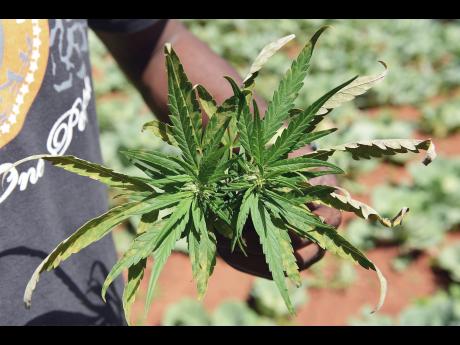 A farmer shows off a marijuana plant.

A proposal to allow Utah residents to use oil extracted from marijuana to treat more diseases, including cancer and HIV, received an early vote of support Wednesday from some state lawmakers.

The measure also would allow the oil to be produced and distributed in Utah. The state currently lets only those with severe epilepsy who meet certain conditions have the oil, and only if they get it from other states such as neighbouring Colorado.

Supporters say 2,000 to 5,000 people would be issued cards under the new programme from Rep Brad Daw of Orem and Senator Evan Vickers of Cedar City, both Republicans. The Health and Human Services Interim Committee voted 10-5 to support it.

The panel did not vote on proposal for a much broader medical marijuana programme that lawmakers have been weighing since earlier this year.

The extract called cannabidiol is low in THC, the hallucinogenic chemical in marijuana, and high in CBD, a chemical that some believe helps fight seizures.

Doctors who recommend their patients use the oil would need to report side effects to the health department, and no doctor would be able to have more than 100 patients on the oil. The programme also would cover those with AIDS and certain chronic pain conditions.

Wednesday's vote does not advance the bill but is a stamp of approval that could boost support for the measure when the full Legislature meets in January to begin regular hearings and debate.

The other proposal, from Saratoga Springs Republican Senator Mark Madsen, would allow those with certain chronic or debilitating conditions to consume edible marijuana products such as brownies and candies that contain higher levels of THC. It would ban smoking pot.

He has discussed the idea with the committee several times since summer, but a draft of the proposal wasn't ready for a vote. Madsen has said his plan likely would cover more ailments, estimating that about 100,000 people could be issued medical marijuana cards.

He made a similar proposal earlier this year, but it failed when lawmakers said they worried about whether it would serve as a smokescreen for expanded recreational use.

convince colleagues. He is not running for re-election next year, making the 2016 session his final chance to advance the proposal.

He has said that if Utah doesn't pass a marijuana programme, he would move to one of the 23 other states that permit medical pot after his term ends.

"I believe the people of Utah are at least as smart as the people of 23 other states that have medical cannabis," Madsen said Wednesday.