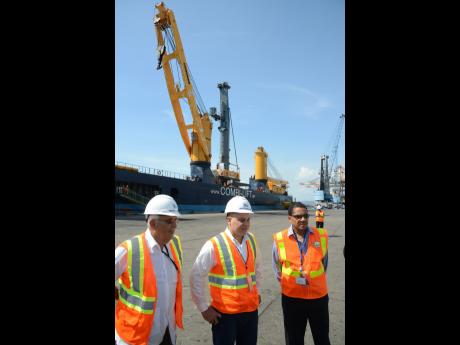 Kingston Wharves Limited has acquired a US$4 million ($480 million) mobile harbour crane, the largest in operation in Jamaica.

The Liebherr LHM 550 brings the company's fleet of cranes to five. It is capable of lifting up to 140 tons of cargo, compared to the others that lift 100 tons and 125 tons, which means the port company can load and unload cargo in a much shorter time.

It will also be able to strip larger ships that are expected to dock in Jamaica starting around next year.

"Given that Christmas is close, it will ensure that ships are completed earlier so that the containers can be unloaded and persons can have access to their barrels well in advance of Christmas," said Kingston Wharves CEO Grantley Stephenson.

Stephenson said the crane, designed for versatile and efficient cargo handling up to post-panamax-sized vessels, would be assembled and commissioned by technicians from Germany. "With Jamaica positioned to take advantage of the Panama Canal expansion due to its strategic location in the Caribbean, Kingston Wharves is positioning itself to be the port of choice," the company said.