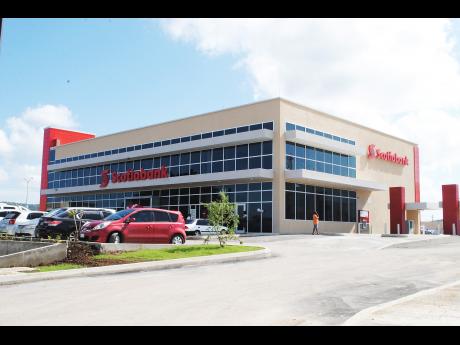 A Scotiabank branch at the Fairview Complex in Montego Bay.

Scotiabank Jamaica increased fees on key customer accounts, effective December 1, in a move which, on the surface, seeks to increase ebbing revenues at the financial conglomerate.

senior and junior accounts, will keep monthly fees at nil, accor-ding to a notice by Scotiabank.

The notice, posted on the bank's website, titled 'We are making some changes to our accounts', highlighted the new changes but did not list the old rates.

At the same time, the bank revealed that the highest interest rate offered to holders of these accounts would total 1.5 per cent. That rate specifically relates to holders of its 'signature saving account' on funds of $5 million and over. The rates are subject to change at any time.

Queries about the fee changes sent to the Corporate Communi-cations Department of Scotia Group Jamaica (SGJ) on Monday were unanswered up to press time.

Calls to Scotiabank's customer service indicate that key fee changes include total access accounts up from $450 to $600 per month; regular payroll saving account, up from nil to $190 a month; and the foreign curr-ency accounts that impose a monthly fee of US$1.75, which, previously, was waived with a minimum balance of US$100.

"This was primarily due to increased transaction volumes across all portfolios, which was more pronounced in our credit card and merchant service business. However, we reported lower insurance revenue, lower net gains on foreign currency activities and financial assets in the investment management segment of the group," the banking group said in the release of its third-quarter financials.

Although its net fee and commission income is up, Scotia Group made $6.1 billion or less in net profit 23 per cent in the nine-month period. Also, its revenues were down by 2.6 per cent, from $23 billion to $22.4 billion.

SGJ explained in its financials that the reduction was impacted by an asset tax expense of $1.29 billion based on the adoption of new accounting rules as well as the increase in the asset tax rates imposed in May 2014. It also blamed lower gains on some of its products.