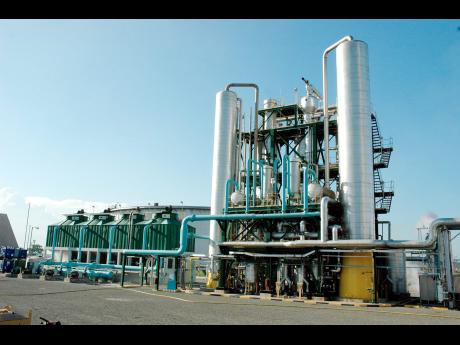 Contributed
A section of the Petrojam refinery in Kingston.

Netherlands-based Trafigura Beheer Limited won six spot order agreements to supply billions of dollars in fuel to Petrojam for the first half of 2015 or twice the number in 2014, which appears to mark a heightened re-engagement with Jamaica, according to official documentation seen by Wednesday Business.

It dispels any perception that the country blacklisted the oil giant.

Trafigura was awarded fuel orders for delivery to Petrojam, the State's oil refinery, valued at some $2.8 billion this year.

The Gleaner was unable to find any additional contracts since 2006 when Trafigura triggered a political scandal in Jamaica. However, Howard Mollison, the general manager of Petrojam, said the oil trader continued getting spot orders in "2007, 2008, 2012 and 2014 and 2015". Spot orders are short-term agreements which fill shortfalls in supplies in comparison to long-term oil-shipment contracts.

Trafigura is the world's third-largest private oil and metals trader. It became embroiled in controversy for a $31-million political donation to the People's National Party administration, which was then the governing party. The party's general secretary at the time, Colin Campbell, resigned as a result of the scandal.

"Public international tenders for fuel," Mollison said succinctly in an emailed response to Wednesday Business queries on why Trafigura won the orders. "The process of open tendering assures value for money." He added later in a telephone conversation that these orders were split across various political administrations.

"All purchases of this nature are reported to the contractor general. We are unaware of any issue with the contracts, as the process is transparent, subject to audit and provides the best value for money," he wrote.

Christopher Cargill, chairman of the Petroleum Corporation of Jamaica, the parent company of Petrojam Limited, added that Trafigura was free to submit bids for tender.

"Petrojam has never removed Trafigura from their list of approved suppliers," Cargill said, also via email.

Last year, a Gleaner article seemed to indicate that the PCJ would avoid contracts with Trafigura, but Cargill has clarified that position, saying the comment was specific to the subject under discussion.

"I am not seeing where this article states that PCJ would avoid contracts with Trafigura. What I see being said in the article is that in reference to the LPG proposed project for Bogue, we would refrain from further discussions," he said.

Energy Minister Phillip Paulwell was said to be in meetings and unavailable for comment up to press time.