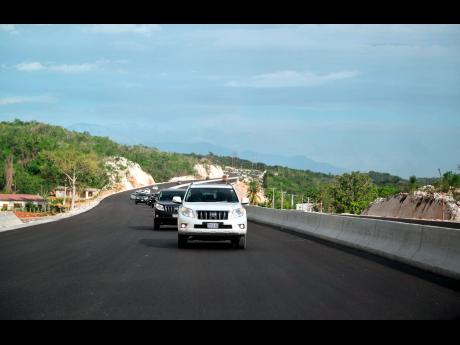 Section 1 of the North-South Highway developed by CHEC.

China Harbour Engineering Company (CHEC), developer of the north-south leg of Highway 2000, is to be compensated if any action or breaches by the Jamaica Government results in a reduction in traffic levels on the toll road.

The environmental impact assessment (EIA) study for the highway project was commissioned by state-owned National Road Operating and Constructing Company (NROCC), and any fall-off in business on the highway that arises from incorrect or misleading findings in the report would trigger a payout to CHEC.

In the event of a disagreement between CHEC as the concessionaire and NROCC, the state agency may bring in an independent traffic adviser of neither Chinese nor Jamaican nationality, and with at least 10 years experience, to determine the level of compensation.

Under the concession agreement for the North-South Link, NROCC was required to conduct the EIA and obtain and provide all other environmental documentation to CHEC, which were used by the developer in its application for environmental and planning permits from the National Environment and Planning Agency and any agencies.

However, NROCC was required to bear all the costs, fees and expenses in relation to the permits.

"It is acknowledged that the developer will rely on the EIA and other environmental documentation and that such documentation shall be addressed to the developer and the grantor. Following completion of the EIA, the developer shall be responsible for complying with the permits issued in accordance with the EIA," said the concession agreement for the toll highway.

The Chinese outfit took over construction of the north-south link following an impasse between Jamaica and French developer Bouygues Travaux Publics and its local subsidiary TransJamaican Highway after geotechnical faults were discovered along a 650-metre stretch within zone two of the Mount Rosser project in 2010.

Under the concession agreement, CHEC is to be compensated if the EIA as well as warranties or information from NROCC turn out to be incorrect or misleading in a 'material respect', that is, a single event that leads to the reduction of CHEC's income or revenue by more than US$100,000.

According to the same clause, NROCC declared that it has made all the relevant payments to TransJamaican Highway/ Bouygues for the section of the Mount Rosser bypass constructed by the French company before CHEC took over the project.

NROCC also states that the documents relating to Bouygues' construction of the Mount Rosser bypass are a complete and accurate set of preliminary and detailed design drawings, specifications and variations adopted under the TransJamaican Highway agreement.

Part of the Government's agreement with CHEC was that it would refund NROCC the US$120 million the state-owned company spent on the Mount Rosser bypass up to the time the geotechnical problems were uncovered.

That sum is to be repaid over the life of the concession agreement with CHEC, but payments have not yet commenced, NROCC said in emailed responses to Financial Gleaner queries.

In April 2012, before an agreement was reached with CHEC to take over construction of the north-south leg, NROCC's managing director, Ivan Anderson, told a parliamentary committee that there was an arrangement for Bouygues to fund 66 per cent of the cost of the Mount Rosser bypass project, while NROCC would finance 34 per cent.

NROCC clarified earlier this week that the information to the parliamentary committee would only obtain in the event that there was no agreement with CHEC to complete the north-south leg.

"These are the proportions that would have been paid by the various parties (NROCC/ Bouygues) to complete the Mount Rosser project," the agency said.