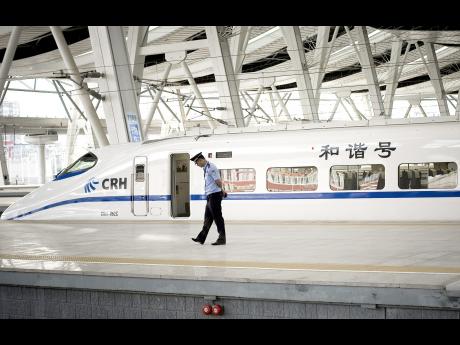 The first three words typically memorised by students of Mandarin are 'Yi, Er, San', which translate to 'one, two, three'.

The first word is also the basis for China's next phase of development. Yi Dai means one belt. Yi Lu means one road. The initiative was announced late in 2013 as a vehicle to integrate China with its neighbours and develop an alternate trade route across the Eurasian land mass.

The programme is huge. More than US$40 billion has been initially slated, but most analysts estimate that the cost will run into several trillion dollars. It consists of two major components. The first is a railway/highway network that pierces across western China and into Kazakhstan. The second is a maritime belt of port facilities across Southeast Asia and along the Indian Ocean that strengthens its presence in the region.

There are many facets to Yi Dai, Yi Lu (YDYL). The first is to shift China's centre of gravity westwards. Most of the country's manufacturing activity is concentrated along the coastline, leading to overcrowding and environmental problems. At the same time, the western regions are relatively empty. By developing a land route across Eurasia, China could shift much of its manufacturing base away from its vulnerable coastline.

China feels that its ports are at risk. Its access to the Pacific and major waterways are restricted to a series of passages that could easily be closed off. By developing a land-based trade route, the country would reduce its dependence on maritime transportation.

The new Asian Infrastructure Investment Bank is at the heart of the initiative, providing the financing to implement the enormous programme. Large multinationals are being offered generous tax breaks to relocate to the western cities of Chengdu and Chongqing, as the new YDYL gateways.

Beijing also sees an opportunity to expand its cultural influence in Central and Southeast Asia. In addition to the railways and highways, the government will modernise infrastructure by building new hydro and thermal electric facilities. The idea is to accelerate Central Asia's development to create new markets for Chinese brands and products. As a result, there will be an opportunity for two-way trade flows, with raw materials moving east and Chinese manufacturing going west. Last of all, it is a counterbalance to the United States/Japan-led Trans-Pacific Partnership (TPP), which aims to divert trade and investment with China.

Of course, the programme is fraught with risks. While most governments welcome the massive investment in roads, railroads and power generation, many political voices consider YDYL to be a new form of the Mongol invasion. The experiences in Africa and Latin America show that the Chinese have a penchant for mercantilist relationships that lead to problems of dependency. These regions send raw materials, with no value-added content, in return for shoddily made Chinese manufactured goods.

Chinese financing initiatives exacerbate the situation. Beijing has provided several Latin American countries, such as Venezuela, Argentina and Ecuador, with billions of dollars in generous financing. However, the funds are only available in RMB, forcing them to increase their imports from the mainland. Today, Africa and Latin America run huge trade deficits with China, and the same will happen to the Central Asian countries along the new Silk Road. Moreover, Chinese projects usually come with labour included. This means that hordes of Chinese labourers will soon disembark across the major cities of Central Asia, marking a new version of the ancient invasions.

YDYL constitutes a major shift in China's foreign policy. As it moves deeper into Central Asia, it will make contact with the most destabilised parts in the world. One of the YDYL branch lines will cut into Pakistan to connect with the belt that girds the Indian Ocean. Another corridor contemplates cutting through Western Ukraine, while a northern line will slice through Mongolia and Russia.

A great deal of historical sensitivities will need to be massaged as the Chinese spread their tentacles westwards. In addition to dealing with complex issues, such as the feud between the Shia and Sunni, the rise of ISIS or the conflict between Russia and Ukraine, the Chinese navy will need to guard the sea lanes of communication along the Western Indian Ocean, keeping the marauding bands of pirates at bay.

Of course, this will bring China into confrontation with the United States, which has been the traditional power broker of the sea. It will also intrude heavily into India's sphere of influence, but Beijing does not seem to be deterred in its ambition. Unfortunately, Yi Dai, Yi Lu will not be as easy as one, two, three. It will face a great deal of resistance, as Central Asia realises that it is about to receive another invasion from across the Eurasian steppes.