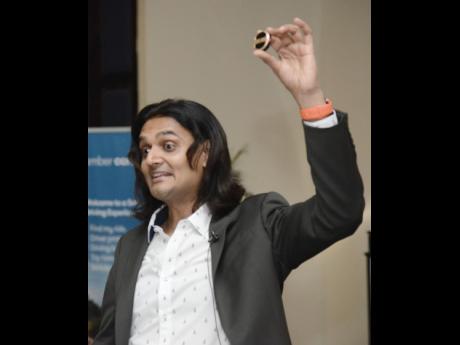 Rudolph Brown
Dushyant Savadia, CEO and Co-founder of Amber Connect, holds up one of his company's security devices in this, October 6, 2015 file photo.

Jamaican security technology firm Amber Connect has gone live with a limited distribution of its car-security device under a non-exclusive distribution agreement with Digicel.

CEO and co-founder of Amber, Dushyant Savadia, said the device, called Amber Car, is now being sold in five of the telecom's Kingston stores in a limited introduction of the product since December. It will roll out to other stores starting late January.

"It's a new product and we wanted to fix the sales channel completely. Also, we wanted to back that with installation processes. We're doing this to ensure everything goes smooth when we fully hit the market by the end of January at the latest," said Savadia.

The Amber vehicle tracker comes in both wired and wireless formats, and is supported by both Android and web platforms. The device features remote engine on/off switch and restart; engine on/off notification trip history, vehicle tracking, on-board diagnostics to detect engine problems, automatic collision and SOS alarm, and even a speed limiter.

"This goes further than the average vehicle tracking offered anywhere in Jamaica. This device puts the owner in total control and, for the first time, you can do what our tag line says 'Track Disable Retrieve'," Savadia said.

It also offers geo-fencing. "A user can actually create a fence inside the app and if the car leaves that prescribed area you get an alert and you can track the vehicle in real time as it moves. You can decide whether you want to disable the car and retrieve it or be in touch to manage the movements," the Amber CEO said.

"At that price, there is no monthly subscription that they have to pay. They don't even have to top up the SIM card every month. For a whole year, there is nothing to pay," Savadia said.

Amber was among the companies displaying their gadgets at the CES International electronics show in Las Vegas. On Thursday, Savadia said he has had enquiries about his products from prospects from South Africa, the Caribbean, Asia-Pacific and the United States. The show wrapped up on Saturday.