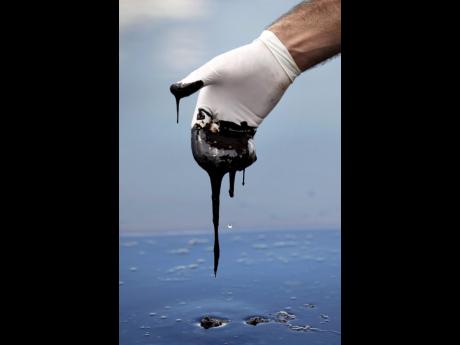 In June 2015, the Government of Jamaica booked a hedge transaction to buy six million barrels of oil for delivery 15 months later at a strike price of US$66.74.

The mechanism used in this kind of transaction is called a 'call option', which gives the purchaser of the option the right, but not the obligation, to purchase the asset at a specified price the 'strike price' within a specified time. A month later, it bought another 15-month futures contract for two million barrels of oil and the average strike price of the two contacts is US$66.53.

We paid about $30 million to Citibank for the privilege of placing this bet on oil prices going higher than our strike price in 15 months.

When these contracts to buy crude oil were booked, prices on the world market was trading at about US$63 a barrel and had rebounded from about US$45 in January 2015. The government placed a bet based on its belief that crude oil prices would continue to rise well above the $66.53 strike price. If that were to happen and oil prices were to increase to, say, US$80-US$90 per barrel, the Government would be in the delightful position of having to pay only about US$66.53 per barrel for oil that would be trading at the much higher spot price on the international commodity market. The Government of Jamaica, senior executives at the Bank of Jamaica, and members of the oversight and technical committees created by the Government to manage the hedges, all seem to have bought into the belief that oil prices would climb higher than US$67 before the expiry date of the options.

The oversight committee is comprised of the financial secretary, Devon Rowe; the governor of the Bank of Jamaica, Brian Wynter; the managing director of the Development Bank of Jamaica, Milverton Reynolds; the managing director the Petroleum Corporation of Jamaica, Winston Watson; and Dr Vincent Lawrence. Mr Watson is known to have experience in oil trading and markets. Only Michael Hewett, an executive at Petrojam, was named as a member of the technical committee.

One has to believe that the intention of the members of the government-appointed committees and all of those involved in the hedge transaction was a good one to try and protect Jamaica against that time in the 15-month period when oil prices might spike above US$67. While there is still considerable time to the maturity of the call options, right now the bet is not looking good and the best projections are for oil prices to fall even lower than the below-US$30 they traded at this week.

This week, three important financial institutions released projections indicating that oil prices could fall to US$10-US$20 per barrel and stay there for sometime. Goldman Sachs' projection was at US$20, Morgan Stanley's was US$20 and Standard Chartered, a bank with strong roots and connections in the Middle East and Asia, projected US$10 a barrel oil.

In the futures trading business, which is where these call options reside, when an option is bought with the expectation that the price of the commodity will increase but the opposite occurs, the option is said to be 'underwater'. Given that these options were booked with the expectation for oil price to rise above US$66, and they are now heading in the direction of US$20, Jamaica's call options on oil are seriously underwater.

In November 2014, a public official asked me about hedging because someone had written him an email to encourage Jamaica to hedge oil transactions on the upside, based on a scenario the email writer concocted about the state of affairs in the international oil industry. The public official was aware that I had traded oil futures for many years and had lived in the Middle East for more than two decades. I share below an excerpt from my reply:

"The recommendation needs study because taking a position means the Government and Jamaica will be guessing the direction of the movement of the price of this commodity. The writer makes it sound like making money on these bets (options) is a sure thing. It is not.

"There is always a risk. Suppose we bet on a certain price increase in a specific time frame, which we would have to if we are going to hedge, and prices instead of rising to, say, US$70/bbl from US$50 falls to US$35/bbl during our hedge horizon, we would suffer an important loss depending on the size of the contract. This is what apparently happened to that forward position Jamaica took on that futures contract on aluminium with the Russians and/or Glencore, the debilitating result of which you are very familiar.

"When oil went to US$9/bbl in the 1990s, if you had dared to tell anyone about the US$147 per barrel price which occurred in July 2008 they would have declared you mad. It's a commodity; any card can play. On review, if the writer sees the prices as going one way, down, and OPEC is 'dead', why hedge? Do nothing, stay addicted to imported oil and go for the lovely ride to low-oil-price nirvana.

"The better alternative is to wean ourselves off the 98 per cent dependence on petroleum-based fossil fuels for our energy supplies. We really need to develop and use renewable energy from many sources, including bagasse, garbage, wind, water and solar."