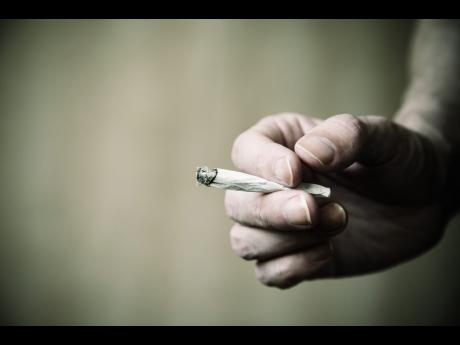 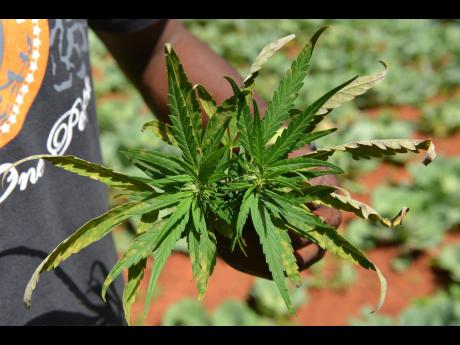 File Photo
A farmer shows of the distinctive leaves of the marijuana plant.
1
2

At least four ganja growers and consultants are known to be separately experimenting with crops or supply chains in undisclosed locations so that they are ready to roll once Jamaica gives the green light on commercial licences.

Junior Gordon from Westmoreland is not saying, but another industry source who has tested his product says that he has the highest-grade marijuana, with Tetrahydrocannabinol, or THC, content in excess of 23 per cent. That compares to the 9-13 THC content normally found in Jamaican ganja.

"I have already signed an exclusive contract with a pharmaceutical company. I have so many more people calling me daily and coming at me to make deals, but at this time, what I am producing is exclusive to this company," said Gordon.

The strain of ganja that Gordon has developed is very high in THC but low in another active substance called Cannabidiol (CDB), according to the industry source.

Gordon has been perfecting a strain, which he code-named ATN, on his secret ganja farm in western Jamaica.

"I can't say too much, but we have gone through a generation of breeding and stabilising and hybridising ... ," he said.

The Cannabis Licensing Authority (CLA) this week announced that it would start accepting applications for interim licences to ganja businesses on April 4, whether they be retailers, growers, or researchers/product developers.

The announcement came with a concession for small growers, who, up to now, have been the operators in what was essentially criminal activity.

"As a special concession to ensure the participation of small growers in the new industry, the CLA will waive the up-front payment of licensing fees for this category of licensee for the first year of operations," said a press release out of the Ministry of Industry, Investment and Commerce. It is a tangible demonstration of the ministry's intent to follow through on promises to protect small farmers who have become economically dependent on the crop.

The call for applications comes a year behind the creation of the CLA in April 2015 in the first phase of the decriminalisation of the drug.

The final regulations to be issued for commercial ganja will cover permits for cultivation, transporting, retail, inclusive of tea houses and therapeutic services, manufacturing and processing and research, as well as export licensing.

Triston Thompson of Tacaya, a cannabis consulting and brokerage firm, has been busy positioning players to reap economic benefits from the formal industry once the market opens up. His target includes small farmers, who, by themselves, don't have the capacity to tap into the value chain.

"We've invested a lot of time and personal resources to get persons in place," said Thompson.

"So far, we have been in touch with about 500 ganja farmers, mostly in the west, but also St Ann, St Catherine, and even as far as St Thomas, to spread the word that they must get ready because a legitimate ganja industry will call for standards and efficiency," he said.

Since 2014, Thompson has helped to form the Westmoreland Hemp and Ganja Farmers Association. Over the course of 2015, the group hosted six workshops and other meetings and brought in the High Times Ganja festival.

Thompson says a lot has been happening and that the pace would pick up even more when the regulations are introduced.

"Already I can tell you that there will be no less than 12, and maybe up to 24, tea houses in the Negril area. People who use them can benefit from infusions that come in drinks, edibles, and nutraceuticals. There are some really exciting prospects," he said.

Kim Ford of Mighty Jamaica Natural Products has a farming venture that has morphed into a ganja research and production operation. She has been busy setting up greenhouses and organic farming for ganja with a keen eye on manufacturing a full range of products, including soaps, edibles, and topical lotions, and is even researching eye drops and cancer treatments.

Ford was attracted to the industry after seeing the effects of non-communicable diseases on several relatives.

"In my family, we've had cancer, high blood pressure, and things of that nature, and with the use of medicinal ganja, it helped people like my uncle live a longer life," she said.

Ford, who has a background in nursing and biomedical research, would not be drawn on how much she has invested so far, but she has a keen eye on the money to be made.

"The US market last year was worth about US$5.4 billion, and with Jamaica being one of the countries that will eventually be able to export elsewhere, it will put us in a better position to set the standard for the rest of the world," she said.

Maurice Ellis of Sun Spice Seasonings has been nursing green shoots for the last six years.

"What we've been able to do is to put ourselves in a position where we saw the industry developing abroad, and we knew that within a short space of time, it would have got to our doorstep. So we set about preparing our space and making the right connections for a time like this," Ellis said.

Sun Spice Seasonings will be concentrating on manufacturing.

Ellis says, he has already settled on partnerships with ganja farmers that who despite not being licensed, are busy producing the raw material in the necessary volumes so that production levels can meet demand on the world market once Jamaican authorities give the green light.

"We are acting locally but thinking globally," Ellis said.