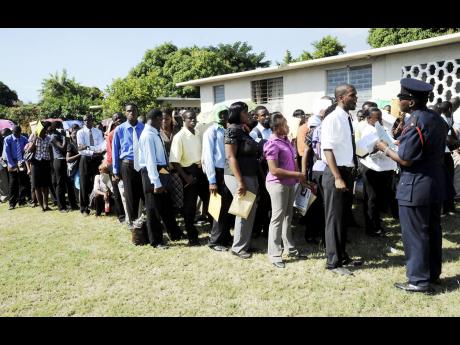 Norman Grindley
In this December 2012 photo, job seekers queue at the St John Ambulance headquarters at Camp Road, St Andrew, in response to a newspaper advertisement by the Jamaica Fire Brigade. High unemployment, especially among youth, continues to be a major problem. A report on the result of a mobile survey conducted between February 29 and March 2 by the local office of UNICEF and anti-discrimination campaign Respect Jamaica and published in The Gleaner yesterday shows that 93 per cent of respondents listed employment as the major concern for youths.

United States-based economist David Card has found that raising the minimum wage does not necessarily result in increased unemployment and even has the potential to reduce it, according to the March 2016 edition of Finance & Development.

Card analysed the impact of the minimum wage on the New Jersey, United States, fast-food industry and compared it with neighbouring Pennsylvania which kept it unchanged.

Finance & Development, a quarterly magazine published by the International Monetary Fund (IMF), said Card and his co-author of a book, Professor Alan B. Krueger, found that, relative to those in Pennsylvania, fast-food restaurants in New Jersey actually increased employment by 13 per cent, evidence that the rise in the minimum wage did not have the adverse effect feared by many.

Although that study was conducted in the United States, there is currently a debate raging in Jamaica that if the Jamaica Labour Party (JLP) Government increases the minimum wage, as promised on the campaign trail leading up to the general election in February, it will result in an increase in the island's unemployment rate.

On Monday, the Micro, Small and Medium-Sized Enterprise Alliance and the Small Business Association of Jamaica were reported as saying that job cuts were certain if the Government goes ahead with its pledge to increase the minimum wage to $8,200 a week from the current $6,200.

The IMF has from time to time zeroed in on Jamaica's unemployment rate, noting the improvements in other economic indicators while impressing on the local authorities to take action to further reduce the jobless rate.

In the last memorandum of economic and financial policies submitted to the IMF in December 2015, the then government said that while Jamaica has made important achievements under the economic support programme, overall growth remained weak and unemployment, though declining, remained high.

Unemployment fell to 13.1 per cent in July 2015, about 0.7 percentage points lower than a year earlier, with the business process outsourcing sector registering the biggest employment gains, the IMF report said.

However, Statistical Institute of Jamaica data shows that, as at October 2015, the unemployment rate inched up to 13.5 per cent.

According to IMF staff appraisal, the proposed revision of fiscal and monetary targets, which includes a reduction in the primary surplus to seven per cent from 7.5 per cent of gross domestic product, should provide important room to boost growth and lower unemployment while keeping debt on a sustainable path.

Update on the unemployment rate is among selected economic indicators contained in the memorandum of economic and financial policies presented by the Jamaican Government to the IMF on a quarterly basis.

Of the research on the minimum wage, Finance & Development quoted Krueger as saying that the study made a lot of noise, but it almost didn't happen.

"Our natural experiment almost didn't come to pass, as the [New Jersey] state legislature changed and voted to repeal the minimum wage increase before it took effect. The governor vetoed the repeal and had just enough votes to avoid being overridden. ... In a way," Krueger notes, "this made our comparison more compelling because the minimum wage increase partly came as a surprise, so employers wouldn't have fully adjusted to it in advance."

Finance & Development said Card's empirical work has always been shaped by a degree of uncertainty. "Our basic state of knowledge in economics is way below where you would think it was," he said, adding that "the thing that annoys non-economists about economists is their unbelievable certainty that they know what they are talking about, when the actual reality is they do not really know."

The magazine said Card's research on minimum wages has frequently been cited by campaigners who seem fairly certain about the benefits of increasing it, noting that that makes Card uncomfortable.

"I don't go around saying you should raise the minimum wage. Yet advocates point to my work to say they should raise minimum wages. That's one reason why I don't work on that topic anymore, because everyone just assumes I'm advocating for raising the minimum wage, and, therefore, everything I do will be discredited," he said.

"It's the same with immigration," he continues. "There is no point in me writing another paper on that, because everyone just assumes that I must be advocating raising immigration."

Card's frustration is palpable - he is tired of seeing his research oversimplified and used as lobby fodder, despite all the caveats attached to his work, Finance & Development said.