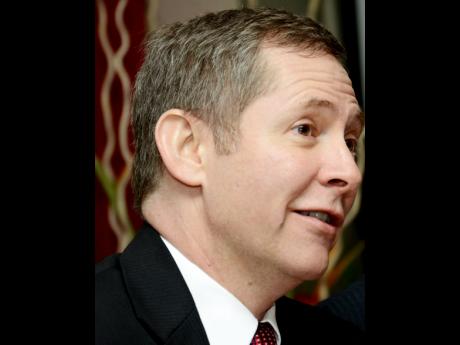 Scotiabank has confirmed the resignation of Bruce Bowen, senior vice-president in charge of the English Caribbean, who at the moment appears to be chilling out in Hawaii.

Bowen, once of the region's most experienced bankers, built his career working in Caribbean countries in varying capacities with his penultimate position as head of the Jamaica operations.

He was named headman for the Caribbean operations in Scotiabank Canada's international banking division in September 2013, a month after handing over to Jacqueline Sharp, who became the first woman to run the local bank.

"Bruce has had a long and distinguished career with Scotiabank in the Caribbean, serving in the Cayman Islands, Trinidad and Tobago, Puerto Rico and Jamaica before taking up his latest position," said Scotiabank in response to Wednesday Business queries.

Scotiabank said it would announce further changes in its regional management structure to accommodate this change "in due course".

Bowen's last tweet on Monday indicated that he was in Hawaii.

"Second night at Waikoloa, Hawaii, wine and bites after a long day touring," he tweeted. Bowen did not indicate whether it was a holiday jaunt or business, and he is yet to respond to a request for comment.

Bowen was appointed to the board of Scotia Group Jamaica Limited effective November 27, 2008. He was a former president and chief executive officer of both Scotia Group and the Bank of Nova Scotia Jamaica Limited, succeeding William 'Bill' Clarke in late 2008.

Bowen is a member of the executive and enterprise risk committee and the human resources and pension committee of Scotia's board and is also a director of the Bank of Nova Scotia Jamaica Limited and Scotia Investments Jamaica Limited. There is no indication that he has resigned his board positions in Jamaica.