Walter Molano | Brazil: The start of a new era 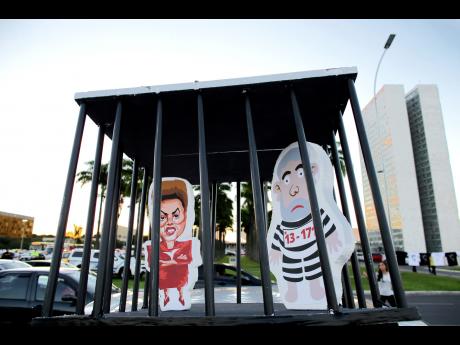 AP
Cartoon images of Brazils former President Luíz Inácio Lula da Silva in prison garb and Brazils President Dilma Rousseff stand inside a mock jail during a protest calling for her impeachment, and against the naming of her mentor as the new chief of staff, outside Planalto presidential palace in Brasilia, Brazil on March 21, 2016.

A whirlwind of headlines hit a crescendo last Sunday night as the lower house of congress delivered its historical vote in Brasilia.

Lula and Dilma screamed that they were the victims of a coup d'etat, but the impeachment proceedings marked a new era of democratic accountability.

Brazil has a long tradition of democracy, with an even longer history of autocracy.

The slogan on the flag says it all - 'Order and Progress'. The concept of order was carried by the so-called Bandeirantes. They were Portuguese settlers who plunged deep into the hinterlands, enslaving the indigenous population and 'civilising' new territories that brimmed with riches.

An organisational structure, commonly known as the latifundio, ensued. It allowed small groups to control vast estates and commercial areas.

The caste system was further institutionalised at the start of the 19th century, when the Portuguese royal family fled the Napoleonic invasion and established its court in Rio de Janeiro. A deep sense of paternalism seeped into Brazilian politics, business and even popular culture. The all-powerful fazenda master remains a recurrent theme in local soap operas.

Most political manoeuvring in Brazil has been top-down. It's been driven by powerful economic, political and regional groups. Even the 1992 impeachment of President Fernando Collor de Melo was a putsch by some of the larger political parties and interest groups that were adversely impacted by his economic reforms.

Brazilians did not take to the streets until the president went on national television to invoke public support against what he claimed was an illegal attempt to overthrow his government.

Unfortunately for Collor, the public took to the streets to support the impeachment process, after seeing unquestioned evidence of rampant corruption.

Lula's election in 2002 was supposed to mark a break from the past. The PT was supposed to enfranchise the masses, giving them a larger say. However, the trappings of power and the structural flaws of the Brazilian political system co-opted them. The concepts of democracy fell by the wayside, as the party used political perks and economic incentives to anchor their hold on power.

This time, however, the changes have not been initiated from the top. They have been driven from the bottom.

The multitudes who took to the streets of S„o Paulo, Rio de Janeiro, and most of the major cities sent a clear message to the political class that they would no longer accept the corruption and impunity that were standards of Brazilian politics. The masses will no longer kowtow to an imperious political class, as if they were peasants on a fazenda.

Through the use of social media and backed by the power of the press, Dilma Rousseff's impeachment marks the start of a new era of political accountability. Politicians, whose votes would have been previously sold for a plump government position, have had no other choice but to acquiesce to the voice of the people.

Lack of accountability has always been a serious problem in Latin America. Political scientists and sociologists attribute it to a variety of factors, such as the rigid stratification of Latin American colonial society, which was not as prevalent in the North American settlements.

They blame the authoritarian style of the Catholic Church in maintaining social order. They point to the small groups of elites who controlled large areas. Others recall the heavy-handed military governments that left an indelible mark on Latin America society. Several people point to the system of indirect representation that relies solely on the use of electoral lists.

Whatever the case, thanks to new technologies, we are entering an era where political leaders need to respond to the public's demands.

Brazil is one of the most overtaxed countries in the world, with enormous levies on all forms of goods and services. However, it also suffers from some of the worst infrastructure, health systems, public education and crime.

In an environment where the economy is undergoing the deepest recession in almost a century, it is hard to believe that the political class continues to enjoy unlimited perks. This is why the PT's allies abandoned them en masse. They were really fighting for their own political survival, but we may be at the cusp of a new era.

Imbued with a more sensible and responsible government, Brazil can move into the vanguard of the developing world and deliver the rich rewards that have always been at its disposal.