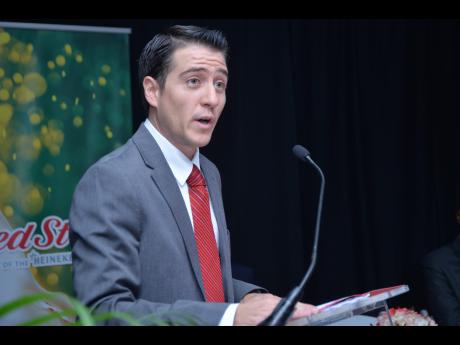 Desnoes & Geddes Limited, which trades as Red Stripe Jamaica, will strive to "responsibly" increase the "frequency" of drinking among adults, which the brewery says is pretty low relative to markets in the hemisphere.

It also plans to double exports in four years, a plan that involves tapping markets never before explored by Red Stripe.

The company estimates that only 75 per cent of drinking age Jamaicans are beer consumers, and it aims to bring the other 25 per cent along, partly by converting rum drinkers to beer.

Red Stripe, which had its 98th annual general meeting (AGM) on Tuesday, wants to grow domestic sales by around 10 to per cent to 12 per cent this year, according to managing director Ricardo Nuncio.

It would add around $1.4 billion to domestic revenue, Wednesday Business estimates, based on the latest sales revenue reported by the company at half-year ending December. Red Stripe reported six-month sales of $7.6 billion of which $6.6 billion was domestic revenue.

The beer maker adjusted its financial year end to December from June to align with the reporting period of new parent, Heineken.

"We are going to introduce more innovation as per capita consumption is still pretty low at only 18 litres, and the penetration is low at only 75 per cent," Nuncio said of the Jamaican market.

"So we are going to introduce more products that will help us penetrate that 25 per cent of consumers who are not consuming beer," he said at the AGM at Red Stripe's operating base in Kingston.

Jamaica's per capita consumption at 18 litres of beer per year falls short of that in Trinidad & Tobago at 40 litres, Mexico at 60 litres, the United States at 65 litres, and Brazil at 72 litres, said Nuncio.

"So we are thinking about lower alcoholic beers, light beers, flavoured and also more premium beers in the mix. So there will be a huge innovation which will drive our sales," he said.

As part of its strategy to gain market share for beer, Red Stripe plans to reduce the relative price difference between beer and rum drinks.

"To grow our share from spirits, we have to increase the affordability of our products. We do that through different formats and through a better pricing strategy," Nuncio said.

The Jamaican brewery also expects to double exports in four years based on Heineken's plan to promote Red Stripe along with eight other beers across key global markets. There are some 180 beers within Heineken's portfolio.

Red Stripe beer is to be exported to new markets, including Mexico, Australia and Brazil, while plans are under way to access Singapore, Russia, Ireland and Ethiopia.

The company will restart exports of Red Stripe to the United States in September 2016, at which chairman Richard Byles believes the company will regain the title as champion exporter in Jamaica.

Servicing the US market from Jamaica will increase Red Stripe exports from 60-65 containers a month to 200 containers a month. It is expected that approximately 300 extra jobs will be added at Red Stripe, and another 3,000 indirect jobs through spin-off industries, particularly in cassava production.