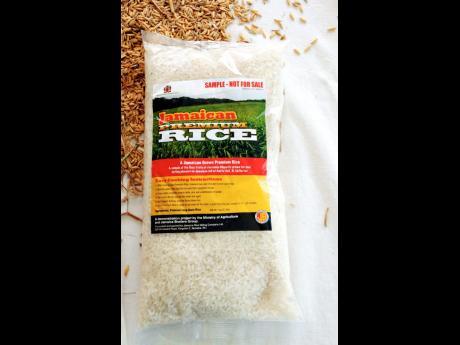 Ricardo Makyn
Jamaican premium rice produced during the experimental phase of the Amity Hall Rice project in St Catherine in 2009.

A plan to help satisfy Jamaica's appetite for rice from local production is in limbo with equipment and facilities lying idle for nearly six years.

Some $60 million worth of equipment, donated by the Chinese in July 2010, remains in storage after the Jamaican Government decided that the four farmers who were willing to grow rice would not be sufficient to make the programme viable.

Government would have provided the equipment and rice seeds in addition to the necessary technical expertise, while the farmers would grow the crop on their own lands or on lands leased from the State.

"We simply just were not able to get sufficient people to get into it. There were probably about three or four farmers between Clarendon and Westmoreland who came on board, but we just did not get the necessary traction in terms of a critical mass to move it," Donovan Stanberry, permanent secretary in the Ministry of Industry, Commerce and Agriculture and Fisheries, said in an interview last week.

When the rice-growing project was being mooted, Jamaica was importing around 100,000 tonnes of the grain. The goal was to substitute around 15 per cent of that with local production, which would mean establishing around 2,500 acres of rice paddies.

Stanberry, while non-committal on whether the Jamaican Government plans to revive the programme, says he personally believes it's worth pursuing.

"The equipment is here; the big question is how you stimulate people to get involved," he told the Financial Gleaner.

However, the head of the company that put $5 million behind the pilot project to test rice production in Jamaica back in 2009 - which the Government had deemed a success - said last week that he is sceptical that local farmers can grow rice at a price competitive with Guyana.

"Guyana is one of the top rice producers in the world. The challenge is that we may not be able to produce rice at the cost that we can buy from Guyana because I feel that the economies of scale are just not there," said Christopher Levy, president and CEO of the Jamaica Broilers Group.

In 2009, Broilers invested in the Amity experimental rice farm, spanning 25 acres, in conjunction with the Jamaican Government. Rice from the paddies were grown and processed, and packaged by Jamaica Rice Milling Limited, a Jamaica Flour Mills subsidiary.

"We set up an experiment out at Amity Hall to demonstrate that it was feasible. We brought in specialists from the Dominican Republic and we had Newport-Fersan working on the fertiliser. All the inputs were there," Stanberry said.

The Tarentum facility in Clarendon was to be for the drying of the rice.

No interest from farmers

All that was needed was for farmers in St Catherine, Clarendon, St Elizabeth and Westmoreland to sign on to grow rice. But less than a handful showed interest.

Stanberry said in hindsight that the Government should have done a better job of selling the successes of the Amity experimental farm.

The last time there was any significant production of rice in Jamaica was 1989 when total output was 2,000 tonnes. The highest production since the 1960s was in 1979, when Jamaica reaped 6,000 tonnes.

Jamaica buys most of its rice from Guyana. Two distributors - Jamaica Rice Milling Company and Musson Jamaica - were each awarded contracts to bring in 40,000 tonnes, or 80,000 tonnes combined, annually.

The rice agreements are for three years, with a potential extension to five years.