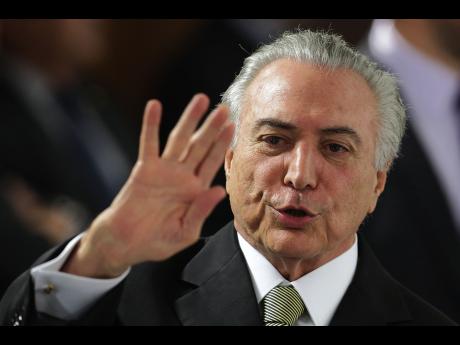 AP
Brazil's acting President Michel Temer waves as he arrives for a meeting on economic measures with party leaders from the Lower House and Senate at Planalto presidential palace in Brasilia, Tuesday, May 24, 2016.

His new anti-corruption chief was under pressure to resign on Monday after TV Globo broadcast a recording of him giving legal advice to the head of Brazil's Senate, a man under investigation in a sprawling kickback probe involving state oil company Petrobras.

The recording broadcast late Sunday also shows Transparency Minister Fabiano Silveira criticising the investigation itself, which has implicated some of Brazil's most prominent politicians and businessmen.

TV Globo also said that Silveira repeatedly contacted investigators in the Petrobras case to seek information on the accusations against Senate chief Renan Calheiros, but he did not succeed in getting any specifics. The conversation at Calheiros' residence came some time before the Senate voted to impeach and suspend President Dilma Rousseff, putting the government in Temer's hands.

Brazilian media said that Temer met other members of his Cabinet this afternoon and decided to keep Silveira on the job for now. The minister told the interim leader that he was not involved in any wrongdoing.

Many of Silveira's staffers blocked his entry to their building in capital Brasilia on Monday. They also staged a protest in which they cleaned the front door of the building.

O Globo newspaper printed an extra editorial to demand Silveira's resignation, echoing calls by allies of the suspended president, who argues that her foes ousted her because she had allowed the Petrobras investigation to go forward.

Another leaked recording forced Temer's new planning minister to take a leave of absence last week. In that recording, Romero Juca suggested that there should be "a pact" to impeach Rousseff and appeared link it to obstructing the Petrobras probe. He denied any wrongdoing or intention to stop the investigations.

O Globo's editorial said that "Temer needs to apply the same rule that he applied to Juca: "There can be no conspiracy against Operation Car Wash", a reference to the Petrobras probe. "It is the only way that his public commitment to support the operation and to fight against corruption will be taken seriously."

Meanwhile, the newspaper O Estado de S.Paulo reported that Temer's seven-year-old son, Michelzinho, is the registered owner of real estate properties worth US$550,000. The interim president told the daily said that he transferred the assets as a way to anticipate his will and that his daughters from previous marriages also received real estate in similar conditions.

The report also shows that Temer's total assets nearly doubled between 2006 and 2014.