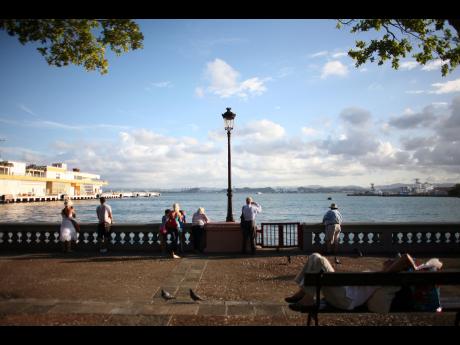 AP
In this November 23, 2011, file photo, tourists look out from the pier near the cruise ship terminal in Old San Juan, Puerto Rico. The island has been hit harder by Zika than any other part of the United States. (AP Photo/Ricardo Arduengo, File)

It was the wedding of one of her best friends, and Natalie Kao was going to be a bridesmaid in a fun, tropical setting on a small island just off the east coast of Puerto Rico. But the prevalence of the Zika virus across the United States territory gave her pause.

Kao, pregnant with twins, knew the mosquito-borne Zika virus has been linked to a rare birth defect in a tiny percentage of cases. But even a small risk was too great. "You don't know the impact, which is very scary," the San Francisco woman said.

She sent her regrets, as did several dozen other members of the wedding party.

Puerto Rico has been hit harder by Zika than any other part of the US, with more than 1,170 confirmed cases, one death and the first microcephaly case acquired on US soil. Now, worries about the virus are starting to affect the tourism industry, which had been one of the few bright spots in an otherwise dismal economy.

The full number of people who have cancelled plans to visit or chose another destination is unknowable. But people have cited Zika in the cancellation of at least 42,000 hotel-room reservations through 2018, which translates to about US$28 million in lost revenue for the lodging, restaurant and tour industry, said Ingrid Rivera, executive director of Puerto Rico Tourism Company.

People who work in the industry say they have been seeing the financial effects of Zika for months, and it appears to be getting worse.

"Cancellations left and right and up and down," said Luis Alvarez Perez, owner of a luxury travel planning and relocation company in San Juan. "People just stopped coming."

Zika is named for a forest in Uganda where the virus was first discovered in 1947 and there have been many outbreaks over the years. Global health officials issued an alert after detecting it in Brazil in May 2015 and it has been spreading rapidly through the Western Hemisphere, carried by the common Aedes aegypti mosquito.

It had not been considered a particularly dangerous disease compared to dengue and chikungunya, which are carried by the same mosquito. Zika can cause headaches, fever, rash and reddened eyes. But it has now been linked to microcephaly, a rare defect in which babies are born with abnormally small heads and brain damage as well as to the unusual paralysing condition known as Guillain-Barre syndrome.

But even rare complications can be scary. Kao said she was told that Zika caused a great deal of anxiety at the February wedding of a friend when some guests were inevitably bitten by mosquitoes.

"Some people cried," she said. "They were upset and went back to their room."

In the ensuing months, cancellations have started to mount. Major League Baseball scrapped a two-game Puerto Rico series between the Miami Marlins and the Pittsburgh Pirates, scheduled for late May, that will now be played in Miami. Tourism officials say that move cost the island US$4.5 million in lost revenue.

USA Swimming dropped plans to hold a training camp here in July. Other large groups also have cancelled, including the California-based Internet Corporation for Assigned Names and Numbers. Dozens of people have withdrawn from an international boxing event scheduled for October.

"We're starting to see a larger impact with the groups," Rivera said. "Clearly it's a trend that we want to make sure that we stop."

Tourism represents only about seven per cent of Puerto Rico's economy, but money generated by visitors has been growing in recent years while other sectors have shrunk during a 10-year recession and the struggle of the territory's government to handle a spiralling public debt.

Some Puerto Rican officials have criticised the US Centers for Disease Control (CDC) and Prevention for what they consider overly alarming warnings. The CDC has projected that more than 20 per cent of Puerto Rico's 3.5 million people could be infected with Zika in an outbreak expected to peak by this summer.

The CDC told the AP that it recognises Puerto Rico is in distress and said US legislators are working to address the island's crisis. But it also said education is key to preventing the spread of Zika. "One of our responsibilities is to provide the best available science to people, and the more we learn about Zika, the more serious we think this virus is," the agency said in a statement.

More bad news came yesterday from the World Health Organization. It said there is growing evidence of sexual transmission of Zika and updated advice to couples and women who have visited areas hit by the virus, strongly recommending they wait at least eight weeks before trying to conceive.

Kao said she loves Puerto Rico and has visited the island multiple times, but noted that her pregnancy is her priority, like some of the other wedding guests who cancelled.

"When the news kept getting worse ... we said: 'That's it. We're not going,'" she recalled. "None of us wanted to put ourselves at risk."