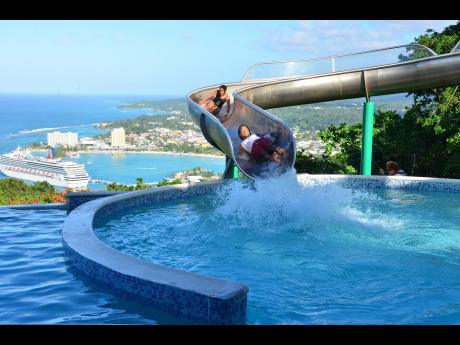 In this October 2014 photo, a cruise ship sitting in the harbour forms the backdrop to guests enjoying the Mystic Mountain water slide in Ocho Rios. The attraction is expanding in Jamaica and to St Maarten.

Mystic Mountain is about to venture beyond its home in Ocho Rios, with plans to go regional and add two new venues in Jamaica, one of which is planned for Falmouth and another near its home base in St Ann.

While negotiations are still ongoing with private and public sector stakeholders, Michael Drakulich, co-founder of the adventure attraction, told Sunday Business that the developments in Jamaica could see another US$6 million per site investment by the eight-year-old company.

Regionally, Mystic Mountain has taken a stake in another project currently being built in St Maarten that will have a 'Mystic Mountain feel' under a US$12 million investment.

That attraction will wear the Mystic Mountain brand and will have similar attractions as Ocho Rios, but not feature the signature bobsled ride, Drakulich said.

Mystic Mountain St Maarten is being developed on 100 acres. Construction will run for 18 months.

Drakulich said the sparse tourist attractions in that country made it an ideal opportunity.

He declined to give details on the plans for the local projects, citing ongoing negotiations, but said Mystic Mountain is positioning to tap the explosion of hotel rooms in the tourist belt and other developments.

He reeled off the planned expansion of the Ocho Rios port, the recently newly commissioned North-South Highway, the Karisma hotel development in Llandovery that should yield some 4,000 hotel rooms over the next 10 years, the reopening of Meli· Braco, among others. Drakulich says he expects some 7,000 rooms to be added to the stock.

"We had lost it to Falmouth and now we are seeing it come back with Ocho Rios again as a major port, so more cruise ship arrivals (are expected)," he said.

"So we want to expand our offerings at our park and expand to another location close to us and all those right now are in the final stages of negotiations," said the businessman.

He added that the existing park overlooking Ocho Rios will also be upgraded, pending negotiations with the Government, the nature of which he refused to disclose.

Mystic Mountain added other rides earlier this year, including another set of zip lines, to meet demand for the popular ride.

The park sees some 300 people per day for that ride alone, he said.

Overall, with its world-renowned attractions such as the Jamaica bobsled ride, which takes visitors through the high tropical forest, humming bird and butterfly gardens and museum, among others, sprawled on 300 acres, Mystic Mountains sees some 130,000 visitors per year.

The park opened in 2008, with financing from the Development Bank of Jamaica, private investors and advanced bookings from the Carnival Cruise - totalling US$7 million overall, Drakulich said.