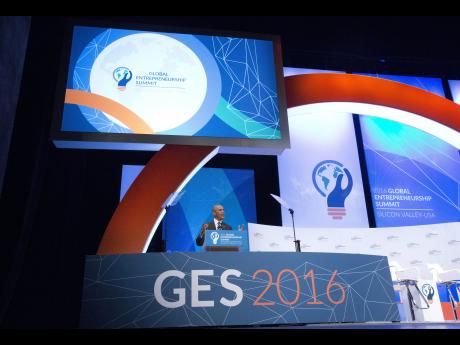 What do violent extremism, health and food security, climate change, and anaemic and inequitable economic growth have in common?

First, they are among the most detrimental and formidable challenges facing the world.

Second, and more important, high-impact entrepreneurs have a leading role to play in unlocking and implementing real solutions to these challenges - if only they were empowered to unleash their full potential.

That was the compelling proposition put to over 700 high-impact entrepreneurs from around the world by US Secretary of State John Kerry as he officially opened the Global Entrepreneurship Summit (GES) on Thursday, June 23, at Stanford University in California.

It's also why the United States has elevated entrepreneurship in recent years, placing it squarely on its foreign-engagement agenda. It's the reason it has expended great effort and invested considerable funds and resources to host the event since 2010 and why President Barack Obama made it a priority to attend and address the summit this past week even after it was opened by his chief foreign affairs officer and adviser.

It is also a proposition worthy of consideration for local entrepreneurs, policymakers, and others who tend to view entrepreneurship through the narrow lens of employment and job creation. And especially those who view enterprise as a purely capitalist and individualistic pursuit.

Below is the charge Secretary Kerry put to entrepreneurs in attendance, watching via live stream, and those he no doubt hoped to inspire to think purposefully and take action.

His words were thought-provoking and inspiring for some, including yours truly.

"We need you to establish your businesses with two frames in mind: to create new products, yes, and do well, yes, turn a profit, help your local community certainly, but also to tackle the enormous global challenges that we face. And in the end, of all the problems that we face, I just want to narrow this down for you to think about it in the context of your meetings in the next days and of what you decide to do when you go out of here and take what you've learned or pursue your dream.

"I want you to think about these interconnected challenges. The first is violent extremism and the emergence of radical non-state actors who have no agenda outside of the frustrations that they exploit, the bigotry that they espouse, and the conflicts that they inflame. And the depth of this challenge is now felt in every single corner of the world, and it was underlined just two weeks ago by the terrorist and homophobic shootings in Orlando, Florida.

His other equally riveting call to action was with respect to the devastating effects of climate change.

As he noted: "I saw with my own eyes what I've been reading for years about melting ice in the polar regions that could, within the lifetimes of babies born today, cause average sea level to rise five to six feet over the course of this century."

"At home, we are already experiencing the effects of rising temperatures, devastating drought, erratic weather systems, disappearing beaches, and the negative impact on fish and marine life. All of which affect food security, health and safety, and our general quality of life."

There was much to take away and celebrate from GES 2016 such as the fact that four Jamaican women entrepreneurs were invited to attend the event as delegates and now have additional knowledge, connections, and resources to advance their businesses, while paying the fruits of that privilege forward by sharing what they learned.

Local entrepreneur Kenia Mattis of Ice Cold Jelly emerged in the top three of 80 pitch submissions, copping US$15,000 and prizes to include the Spark Pitch Competition; and Edufocal's Gordon Swaby was invited to be a speaker at a GES partner event.

While I'm proud of our recognition, the key take away for me was the enormity of our responsibility moving forward, in particular, the importance and urgency of building an entrepreneurial ecosystem that fosters more purposeful and impact-driven entrepreneurs, including social entrepreneurs.

We need policies, programmes, and institutions that will reshape our entrepreneurial class from largely necessity-driven entrepreneurs who are motivated mainly by the need to feed themselves to those who are instead obsessed with exploiting real opportunities and fanatical about their role in solving critical local and global challenges.

The time for action is now.