First Angels to back BookFusion 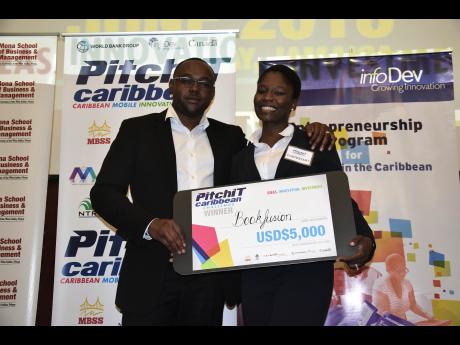 In this file photo, Dwayne and Kelly-Rae Campbell, owners and operators of BookFusion, pose with their prize from the PitchIT Caribbean Challenge held in Montego Bay June 3-4.

The First Angels Jamaica network of investors has selected another firm in which to invest.

"We are also providing financing to integrate the payments (and) e-commerce functionality on both Android and iOS [platforms]," Glasglow said.

Some of the money will pay for a developer to create apps for Apple products, iPad and iPhone, she said.

The e-reader platform will also be integrated with the Ministry of Education's Tablet in Schools Programme, for which First Angels is also providing funding, Glasgow said.

She declined to state the level of funding. First Angels typically does not disclose which of its angels are investing in particular businesses.

BookFusion was started a year ago by husband-and-wife team Dwayne and Kalye-Rae Campbell. It was among the top five tech companies in the PitchIt Caribbean Challenge in June, and was the sole Caribbean entity selected from Latin America and the Caribbean in May to participate in an innovation and entrepreneurship event sponsored by the Inter-American Development Bank. BookFusion will be one of 12 start-ups to participate in the 2016 staging of Demand Solutions on October 4 in Washington, DC.

"Aside from that, we are adding a lot of interactivity in our app," said Campbell.

"If you think about the educational sector, they have a lot of workbooks today that have remained offline. We are making all of them interactive so [students] can hear the sounds and have the books read aloud to them," he said.

The integration into the tablet programme in schools will allow students to participate in tests from their tablets, he said.

"Schools will be able to use the platform to distribute syllabi or teacher notes. They will also be able to create the interactive e-books, for example, multiple choice quizzes and open-ended questions and push that to students' devices whether tablets, phones or computers, have it completed and received on a centralised teacher portal," Campbell said.

The company has also taken aim at Caribbean publishers who, with the advent of digital readers, need to digitise their catalogues.

"Since a lot of them have not made the shift from print to digital, we are bringing that online and making it available, to not only readers in the Caribbean, but on a global scale," the BookFusion CEO said.