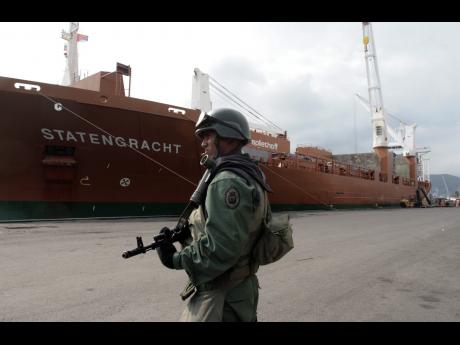 AP
In this March 21, 2009, file photo, a soldier patrols at the seaport in Puerto Cabello, Venezuela, after late President Hugo Chavez ordered naval vessels and military personnel to seize control of two of Venezuela's largest seaports, Puerto Cabello and Maracaibo ports. President Nicolas Maduro promoted Defense Minister General Vladimir Padrino on July 2016, to head what is called the Great Mission of Sovereign Supply. The goal is to boost production and guarantee the smooth distribution of food in the face of what Maduro sees as economic sabotage by his opponents. As part of the overhaul, all ministries will take orders from Padrino, and the nation‚ as ports will fall under the total control of the military. (AP Photo/Howard Yanes) 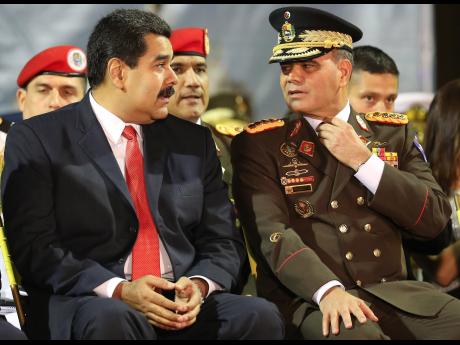 President Nicol·s Maduro's announcement this week that the military will lead the battle against widespread food shortages overlooks one key fact: The armed forces have played a big role in Venezuela's economic mess.

Since Maduro took office in 2013, he has named a number of active and retired generals to run the economy. All five of his food ministers who manage one of the government's largest budgets have come from the armed forces. And they in turn have placed dozens of their military cohorts to lead everything from a state-run chain of supermarkets to an agency overseeing food imports.

None of those moves, however, can match the scope of Maduro's promotion this week of Defense Minister Vladimir Padrino to head what is called the Great Mission of Sovereign Supply.

The goal is to boost production and guarantee the smooth distribution of food in the face of what Maduro sees as economic sabotage by his opponents. As part of the overhaul, all ministries will take orders from Padrino, and the nation's ports will fall under the "total control" of the military.

That has led some to compare the move to a discreet power grab by the armed forces, the historical arbiter of Venezuela's political disputes.

"We're going to defeat this economic war because there's political will, from the people's power and the armed forces," said General Pedro Alvarez while carrying out the inspection near the capital.

But despite the media blitz, little has changed for most Venezuelans.

In several Caracas neighbourhoods, the day began as it always does, with blocks-long lines of shoppers waiting for hours for the arrival of delivery trucks and the chance to buy whatever is unloaded before it hits barren shelves.

At the entrance to the port of La Guaira, where most of the food that Venezuelans consume enters the country, there were no signs of an impending military build-up, just a few relaxed, unarmed civilian police. More worrisome: Not a single docked ship could be seen.

The doubling-down on the armed forces would appear to make political sense for Maduro, who lacks the military background of his predecessor and mentor, the late Hugo Ch·vez. With Maduro's popularity low amid daily food riots and an opposition push to recall him from office, it's vital for him to have the loyalty of the armed forces, which put down a wave of anti-government protests in 2014.

But leaning on the military is unlikely to yield the economic miracle Venezuela desperately needs - at least judging by its record so far.

A press tour in March of a military-run farm near the central city of Maracay showed soldiers readying empty chicken pens and tending a small plot of tomatoes. But it was nothing close to the scale of what Venezuela needs to revive farming and food output, which has withered under more than a decade of price controls that have choked private producers.

With government spending outstripping revenue, inflation has reached triple digits and the bolivar has collapsed against the dollar and other foreign currencies.

As supply chains broke down in recent years, imports surged. But now, those are crashing too.

The collapse in the price for Venezuela's oil has forced austerity measures, leading officials to tightly restrict access to the foreign currency needed by businesses - and many state enterprises - to import raw materials. That has led to a fall in domestic production.

The government plays down those factors, saying that smuggling and speculation in heavily subsidised, price-controlled essential goods is the main reason for the shortages.

On Monday, Maduro ordered the takeover of a plant belonging to the Kimberly-Clark Corp. The US paper products manufacturer closed its operations in the country, saying it was impossible to do business.

In addition to the military's inexperience in economic matters, there are also concerns that it is profiting from the mounting problems.

Security forces frequently appear on state TV seizing warehouses of smuggled goods. When the cameras are off, however, troops have been seen taking goods for themselves or demanding bribes at military checkpoints that have proliferated across the country in the past year.

One of Maduro's former food ministers is wanted on charges of profiting from overseas purchases. Two others, including current head General Rodolfo Marco Torres, are being investigated by the opposition-controlled National Assembly for allegedly inflating contracts and embezzlement. In April, lawmakers demanded Torres' removal for failing to appear before the legislature.

The greater empowerment of military leaders always casts a shadow in a continent scarred by repeated coups, but few experts expect an outright military takeover, which would draw international sanctions.

Some believe that Padrino could be a pragmatic figure who will work behind the scenes to weaken the socialist party's resistance to a recall referendum that, if held this year, could oust Maduro and bring new elections.

When the opposition won control of the legislature in a landslide in December, Padrino - surrounded by the military command - appeared on TV to congratulate Venezuelans for peacefully fulfilling their civic duty. For some opponents, that was a cryptic sign that he isn't wedded unconditionally to Maduro's socialist project.

Some fear the military's enhanced role will only stain the institution.

"They've given the military total power to fix a problem they helped create and for which there's no solution," said Fernando Antich, a retired general and former defense minister in the pre-Ch·vez era. "The only result is they'll now share responsibility for the failure."