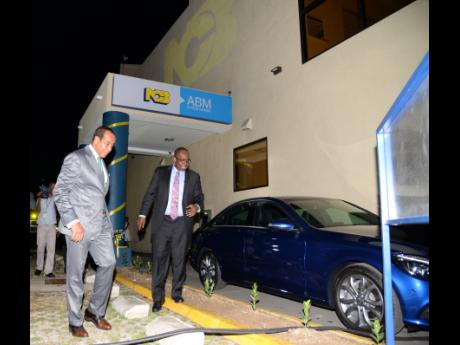 National Commercial Bank Jamaica Limited (NCB) used up billions of its cash flow on the acquisition of a stake in Guardian Holding Limited (GHL) but now says it does not legally own the shares.

In its newly released third-quarter results, the bank said the 29.99 per cent GHL stake is held by nominee NCB Financial Group Limited (NCB-FGL) but then disclosed that it did not own the company.

However, the banking group said it controlled the board of NCB-FGL and that it has accounted for the investment in GHL as an associated company and will apply the equity method of valuing the holding.

"The shares are not legally owned by NCB today, but it will be in the future," NCB group deputy managing director and chief financial officer Dennis Cohen said in response to Sunday Gleaner Business queries. "Well, maybe in the next year or so," he added.

The banking group spent some $28 billion in cash flows on the acquisition during the June quarter.

"The bank does not own NCB Financial Group Limited; however, the company is controlled by the bank by virtue of the composition of that company's board, which gives the bank the ability to direct the operational, financial, and strategic activities of the company," stated the financials.

NCB group managing director Patrick Hylton said the holding company represented the most "effective and efficient method" of acquiring the stake in GHL.

Pressed to explain why, Hylton reiterated that it was efficient.

"It would be more efficient that way. I cannot go into the details because it would not be appropriate at this time. When the time is right, we will. But I am saying that we acquired it through an entity that is affiliated through NCB and has the same directors as mentioned," he said.

Hylton also said it is usual practice to set up special-purpose vehicles to execute acquisitions but was evasive about the ownership of NCB-FGL.

"It doesn't matter because we control it," he said.

However, Companies Office records show that NCB-FGL was registered in April of this year, with just one shareholder named: AIC Barbados.

AIC Barbados is also the vehicle used by Lee-Chin to hold the majority of his stake in NCB itself.

The directors of NCB-FGL are Patrick Hylton, Dennis Cohen, Wayne Chen, Sandra Glasgow, and Sanya Goffe - all of whom also sit on NCB's board.

NCB made $3.9 billion in net profit for its third quarter ending June or 25 per cent higher than a year earlier due to increased fees from loans, commissions, and investment income.

Net profit attributable to stockholders of the company totalled $4.6 billion, but minus non-controlling interest of $683 million, profit was squeezed to $3.9 billion.

Sunday Gleaner Business posited to NCB that without this non-controlling entity, net profit attributable to shareholders would have been higher.

"And that is correct," Hylton responded. "There are certain costs, and so on, associated with this particular transaction, and it is a further manifestation of the fact that the entity will ultimately belong to the shareholders because we are taking the adjustment here," he said.

Cohen then added: "If we didn't, there would be no way our auditors would have allowed us to put it in our financials. So in other words, ownership is not necessarily based on who owns the shares, there are other factors ... and the substance of this is that it is owned by NCB".

In May, NCB closed the acquisition of the 29.99 per cent shareholding in Guardian Holdings bought from the Lok Jack family, the Ahamad family, IFC and one of IFC's affiliates. The total number of ordinary shares acquired amounted to 69.547 million.