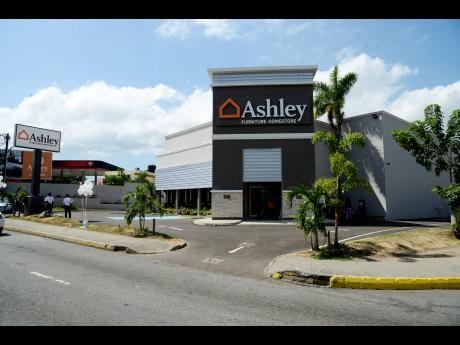 The company, based in the United States, has been selling its products through Courts Jamaica, but opted to make the brand more visible due to increasing local demand for the line, president of international sales and operations, Charles Spang, told Gleaner Business.

Unicomer Jamaica, the local operating company for Courts, will manage the Ashley store and its 14 employees and will continue to distribute the brand through the Courts network.

The 11,200 square-foot Ashley store at Liguanea used to operate as a Courts store.

Both Ashley and Courts are owned by the same parent.

"Unicomer is a legal entity, and within the entity, we have different brands," said Dennis Harris, Unicomer Jamaica's managing director. "What will be unique about this is that there will be a level of exclusivity to the products that will not be anywhere else in Jamaica," he said of the new Ashley store.

Despite the shared parentage, Guerrero said there will be no similarity in the marketing, branding or sales/deals by the two furniture outfits.

Courts will continue to carry a line of Ashley products in its showrooms islandwide under a partnership that began six years ago. That partnership saw the 13 exclusive Ashley galleries open across Courts' network.

Guerrero hopes the new outlet will help Ashley to stamp its own identity on Jamaica. He said other stores are under consideration for Jamaica, but that it was too early to say when that would happen.

"The north coast has been suggested as the next one. We are looking at Montego Bay, among others, but we do expect to continue to grow," Guerrero said.

Spang says Jamaicans' taste has grown more discerning alongside the increasing popularity of online shopping and that Ashley hopes to leverage this.

"Now, the consumer can go online and look at style, and fashions and brands from all over the world, so we really seeing people getting ideas and wanting to get stuff for their home," said Spang.

The Ashley team also advised that the design of the furniture is often influenced by trends specific to the regions in which the chain operates.

Ashley has been operating since 1945.