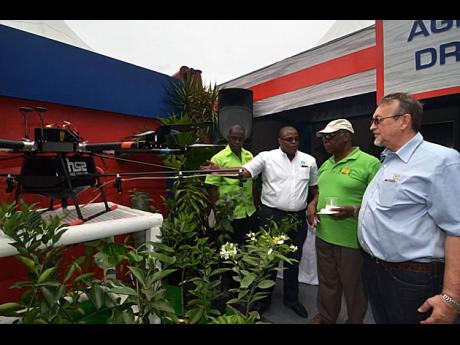 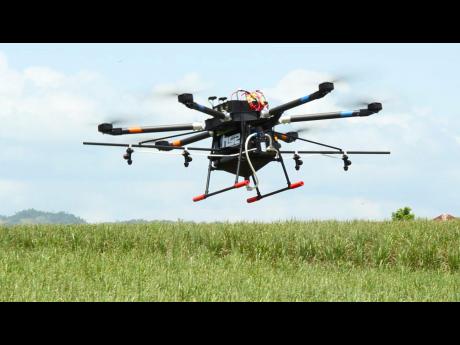 A nascent and little-known drone operating company, Agrocaelum, is already making inroads in the local agricultural sector as farmers tap into the new technology to improve their output and bolster farm management practices.

Agrocaelum was founded last October by pilot Kirk Harris and lawyer Marc Ramsay as the first business in Jamaica to offer drone services. They have since taken on a third partner, Adrian Haye, and have been busy pitching drones to local companies as a more precise tool for field management.

The company currently has its own fleet of five 7-foot sprayers and two agricultural intelligence drones. Soon, it will start selling drones on behalf of US-based Homeland Surveillance and Electronics, with which it has a distribution agreement.

Previously, aerial spraying was handled by another local company, Dustair Limited, which used airplanes to spray crops, but that company shuttered it operations in 2014, creating a gap in the market that Agrocaelum aims to fill.

Like other countries, drones - otherwise known as unmanned aerial vehicles or UAVs - are still a novelty but are increasingly being incorporated into commerce and other business. In the local agriculture sector, the tool is in demand for crop fertilisation and data collection on crops and soil.

Companies such as Jamaica Producers have used the technology to monitor their farm and spray their crops. The banana producer is also an Agrocaelum client. Rainforest Seafoods, meanwhile, has partnered with the Jamaican Government on surveillance of coastal waters amid concerns about the fishing industry.

Speaking with the Financial Gleaner on the take-up by local companies, Harris says scepticism is slowly eroding as farmers see the results of drone operations on their crop health.

"It's been very exciting so far, but it has had its challenges because it's a new segment of the aviation industry. Because it's new technology, customers have been sceptic about its benefits and efficiency. They are hopeful, but cautions," Harris said.

The fledgling company has had to dip deep into its pockets to finance demos to woo clients. "But we are turning that corner. The challenge now is, 'how are we going to provide the service to all these people who want the service now that they are convinced?'" the Agrocaelum managing director said.

Harris was mum on the investment by the partners to set up the company, saying only it has taken "millions of dollars".

Agrocaelum is not hurting for clients. According to Harris, an inflow of four to five new clients each week, now, means the company has its hands full and has to maintain a tight schedule to accommodate the demand.

"That wasn't the case when we just started," he said.

Sugar producer Worthy Park Estates is the company's latest client, having organised a pilot through the Jamaica Broilers division, Hi-Pro Industries, for Agrocaelum to spray its cane fields.

"We are spraying sugar cane and providing a little agricultural intelligence, where we are developing a process to identify weeds that are growing in the cane fields," said Harris.

"It is hard to treat the cane field when it becomes tall and the canopy closes. You have backpack sprayers ... but they don't really get into the middle of the field," he explained.

For sugar cane growers, weed is often mistaken for cane and what often happens is the level of infestation is only noticed at harvest.

The end result should be less chemicals used, compared to the traditional airplane spraying "where you just dump a lot of chemicals and hope that you get everything," he said.

With the drones flying much closer to the canopy or the top of the crops, the chemical is pushed downwards into the crop effectively.

"We are using much less chemicals, compared to an airplane that has to fly higher and faster and release a lot more chemical," Harris said.

Drones present a safer bet for the environment, the businessman asserts.

Previously, concerns have been raised regarding the impact of the aerial deployment of chemicals on other sensitive agriculture operations, such as apiary culture or bee farming. Harris suggested this industry may fare better, since drones offer more precise and targeted spraying.

"We are much safer on the environment and ecosystem. There isn't any off-target drift to affect bees," he said.

Comparatively, while sprayer planes cover a greater area in a shorter period of time, drones are much smaller and cover a smaller area. On average, one drone can spray 12 to 18 acres.

Harris wouldn't say what farmers pay for Agrocaelum's services, only that the cost varies according to factors such as the type of crop and terrain.

"Where Agrocaelum has an advantage is that our operating costs are lower because the drones are smaller than traditional airplanes."

Multiple drones are used to compensate for the larger areas the airplanes can cover.

"We can give accurate count of the crops to farmers to say, 'Mass Joe, you have 237 trees of which 65 per cent is healthy, 35 per cent is stressed and these are the areas that are stressed'," said Harris.

Agrocaelum is targeting 35 per cent of the local agriculture sector in two years for its drone service.

"We are focusing on large commercial and small farm service in Jamaica. The targeted areas are on open, flat fields because it is more practical," said Harris.

The company is looking at servicing coffee farms, but this is more challenging, Harris said, because of the mountainous terrain on which the crop is cultivated.

Agrocaelum is already looking beyond Jamaica for business and expects to start supplying its first Caribbean clients in a few weeks.

"We have an exclusive dealership for a company in the US that supplies spraying drones. So we have interest from other Caribbean countries in purchasing drones from us," said Harris.

The 10-month-old company also plans to offer franchises in the regional markets as well as training in commercial drone operation.

Locally, drone use is manned by the Jamaica Civil Aviation Authority (JCAA). Agrocaelum is lining up for another first as it moves to be certified by the JCAA and is about halfway through the approval process.

Companies can either get a special permit for each time they want to fly a drone or opt to be certified as a drone operator.

Agrocaelum opted for certification by the agency, which will allow quicker turnaround in service delivery to clients.

"That allows us to provide service to our clients in specified areas without having to get permission each time. The certificate is a more detailed process which takes several months," he said.

Staffed by eight full-time employees and another eight contractors, the company is currently compliant with the regulatory requirement of two operators per drone.