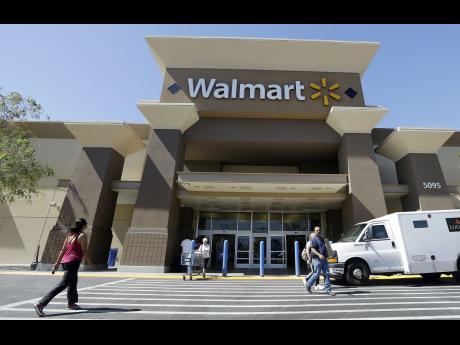 AP
Customers walk outside at a Wal-mart store in San Jose, California.

Wal-Mart's vast fleet of stores and its online business are starting to click together.

The company raised its earnings outlook for the year on Thursday and delivered strong profit and sales for the second quarter, as moves to improve the store and online experience are winning over customers.

Wal-Mart has launched a flurry of changes, from making sure vegetables look good to cleaning up the stores to being sharper on keeping prices low. It's melding online services with the stores - rolling out a mobile payment system to speed checkouts. And it's pressing ahead with online grocery and pick-up services.

As a result, the Bentonville, Arkansas-based company reported its eighth consecutive quarterly increase in comparable-store sales, and the seventh straight quarterly gain in customer traffic.

"We've got existing customers who are visiting stores more often and putting an extra item in their basket," said Greg Foran, CEO of Wal-Mart's US business, which accounts for 62 per cent of total sales. Wal-Mart is also picking up new customers, but that will take some time.

Like its direct store rivals, Wal-Mart is reinventing itself to be more nimble as it tries to fight off competition. In particular, it's trying to compete with online leader Amazon.com, whose Prime shipping programme is swiftly converting members into loyal shoppers. And it faces competition from dollar stores and traditional grocers like Kroger, which are ramping up promotions and lowering prices. The report contrasts with results from Target Corp, which cut its profit forecast Wednesday as customer traffic waned.

Wal-Mart is vastly expanding the items available on its website, and global online sales rose 11.8 per cent in the second quarter. That's up from the seven per cent pace of the first quarter, but still far weaker than the 20 per cent increases from less than two years ago. It's also spending US$3 billion to acquire fast-growing online retailer Jet.com, which it says will help it grab higher-income and younger customers. It will incorporate some of Jet.com's technology that lowers prices in real time.

Chief Executive Doug McMillon said in a pre-recorded call that the growth in global e-commerce came from the improvement in the US market, fuelled by its roll-out of Wal-Mart Pay and the online grocery and pick-up services that it's rolling out. The company added grocery pick-up service to 30 more markets in the second quarter, bringing the total to more than 60.

Second-quarter net income jumped nearly nine per cent to US$3.77 billion, for US$1.21 per share, in the quarter ended July 31. That compares with US$3.47 billion, or US$1.08 per share in the year-ago quarter. Earnings adjusted for non-recurring gains were US$1.07 per share, a nickel better than Wall Street had expected, according to a survey by Zacks Investment Research. Revenue was US$120.85 billion, also edging out analyst forecasts.

Revenue at US Wal-Mart stores opened at least a year rose 1.6 per cent, its best performance since 2012. Customer traffic rose 1.2 per cent, marking the seventh straight quarter of gains. The US Wal-Mart division accounts for 62 per cent of total sales.

The company now estimates that for the current fiscal year, adjusted per-share earnings will be US$4.15 to US$4.35. Analysts had expected US$4.27.

Wal-Mart is also spending US$2.7 billion on higher wages and other investments for its hourly workers over a two-year period. The company also just rolled out a new system in about 650 neighbourhood market stores that gives hourly workers more certainty about their schedules. Wal-Mart says lifting wages, which has turned into a contentious issue for a number of major US restaurant chains and retailers, will lead to a more solid workforce that can better serve their customers.