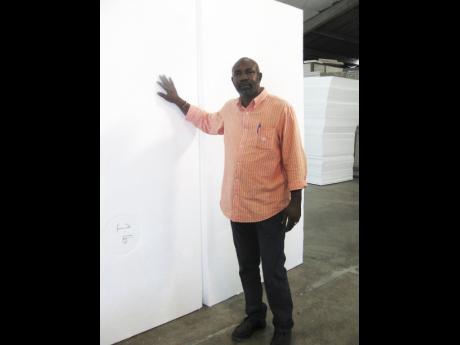 Mel Cooke
In this September 2012 photo, Keith Edwards shows off a block of foam at Free Form Factory in Kingston. 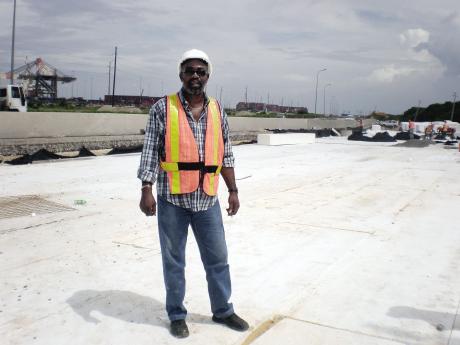 In this July 2010 photo, Keith Edwards, owner and CEO of Free Form Factory Limited, stands on the expanded polystyrene before it is covered with asphalt during the repair of the Portmore leg of Highway 2000. Edwards has now added a recycling unit to compact waste from the manufacture of syrofoam for export.
1
2

The first-ever shipment of scraps of expanded polystyrene styrofoam - EPS - left Jamaica on Friday, amounting to 10 months of accumulated waste.

"We manufacture EPS foam and we generate scrap," said Free Form CEO Keith Edwards. "Rather than sending that off to the dump we are finding a way to preserve the environment while making cash doing it," he told Gleaner Business.

He said the each shipment is expected to net just under $1 million.

Free Form spent just over $5 million in setting up the recycling facility at its Nanse Pen premises last year June, for which payback is expected in five years, according to Edwards. The operation utilises a GreenMax EPS compactor acquired from INTCO Recycling in Canada. That purchase has proved to be a prudent decision, the foam maker said.

"We spent about US$35,000 on this machine and with installation and the changes we had to do to accommodate it the total bill came out at US$40 000," said Edwards.

The machine allows Free Form to transform scrap foam into densified, reusable foam. Edwards says that all the scrap produced during the manufacturing of EPS is now recycled at the factory and that none goes to the landfill. He maintains that it results in near zero waste for Free Form, and that his recycling facility could also handle styrofoam waste generated by others.

Recycled EPS can be made into durable consumer goods such as picture frames, door and window mouldings, flower pots and coat hangers. Edwards says this is an opportunity for those who would throw away styrofoam packaging.

"This is why we want to reach out to those that sell appliances, air-conditioning units and the like to give us the EPS packaging that they would normally send to the dump and we will take it from there," he said.

The first shipment of compacted styrofoam was a 40-foot container with a payload of 15 metric tonnes. Free Form had expected to ship two containers but a bit short on volume. It's one of the reasons the company is pitching its service to other generators of waste.

"When we did the analysis of the quantity we realised that we only had one and a half containers, so we're in the process right now of preparing another shipment," Edwards said.

He is hoping the other shipment will go off soon, especially if those who generate styrofoam can partner with Free Form.

"We're saying to Jamaica, particularly those who sell appliances, air conditioners, and so on, to partner with us. They can pile up the EPS packaging for collection or bring it to us instead of going to the dump," Edwards said.

Free Form is a two-decade-old company which began as a manufacturer of bean bags to supply another of Edwards' companies, Curved Spaces Limited, a furniture operation. Free Form expanded into EPS products around 2002, a range that now includes geofoam for roadworks and other technical applications, external walls and perimeter fences, decorative mouldings, artistic works, coolers and insulation, according to the company's website.

The foam maker is now pointing to a possible business opportunity in the recycling of styrofoam plates, cups and other containers, saying agencies such as the National Solid Waste Management Authority or an entrepreneur should explore the possibilities.

"There is a way to deal with that, which involves a separate operation where we would wash them to take out that grease and then the machine would liquefy that foam by melting and then prepare for export by making ropes or coils," Edwards said.

Pressed as to why Free Form did not pursue such a venture itself, Edwards said it would be taking the company too far away from its core business of EPS manufacturing.

"I am doing this because I want to show other entrepreneurs that there are possibilities out there. To take styrofoam containers on right now would involve capital expenditure and work that I cannot take on at this time," he said.