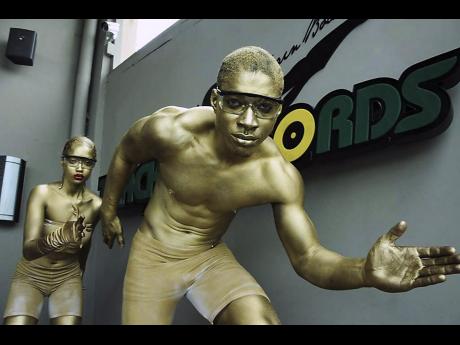 In this 2012 file photo, models strike a running pose in front of the Usain Bolt Tracks & Records signage at Market Place in Kingston. KLE Group has executed its first franchise deal for UBTR.

The restaurant has been open for two weeks and is exceeding expectations, said CEO

Gary Matalon of KLE Group Limited, for what has been his company's first foray into franchising after several years of fine-tuning a franchising model and negotiating deals.

The Ocho Rios franchise is owned by husband and wife team Joshua and Marsha Jhamnani, who have been doing business in St Ann for 20 years.

Located at the Pineapple Place Plaza on Main Street, the restaurant spans 4,850 feet square, including a mezzanine, and seats 130 patrons. Its opening came as Olympian Usain Bolt, who has a business arrangement with KLE for the use of his name, was making history at the Rio Olympics.

"Yes we can confirm that we are in our soft opening phase for the past two weeks," said Marsha Jhamnani. "It's been excellent so far. It is something that we pride ourselves in and we are pleased to announce that our grand opening will be soon," she said.

The franchise mimics the UBTR that KLE Group owns and operates at Market Place in Kingston.

KLE also plans to expand the franchise overseas, and has indicated in the past that it is trying to identify prospects.

The Jhamnanis are not saying how much was invested in the Ocho Rios eatery. They say the place was extensively repurposed to conform to Tracks and Records' standards.

"We can honestly say that is the largest single investment that we've made as a couple of. We've put a lot of effort into it single-handedly which we are very proud of," said Marsha.

"We looked at all the different franchise options, not just Usain Bolt Tracks & Records, but the programme that this one offers is a much stronger brand and we wanted to definitely partake of it and jumped on the opportunity," she said.

Joshua Jhamnani says he has been trying to bring the brand to the tourism town of Ocho Rios for about a year now.

"I came in contact with Mr Matalon sometime last year and we dialogued about bringing the franchise to this location. We settled the contract details about the middle of 2015 and construction started in February, ending in July," he said, noting that the timing gelled with the Rio Olympics in August.

Matalon says KLE is currently in discussions with other prospective franchisees, both locally and overseas, and are excited about the future.

The idea for a totally Jamaican franchise brand came when the partners in KLE were attending a trade show in the United States.

At the time, KLE was also in the nightclub business as operators of Fiction and Famous, both of which were eventually sold as the segment turned into a lossmaker for the company.

"We had enormous success with Fiction and we thought of where we could take the business next. With our interest in sports and entertainment, we came up with the idea for Tracks and Records. The name has relevance to both sports (track and field and setting records) and entertainment (laying tracks and playing records)," Matalon explained.

That decision made, KLE approached several local stars in both sectors and Bolt's team was the one which responded first and positively, said Matalon.

Under the model developed for Tracks and Records, the brand can stand alone or be

sold with the Usain Bolt endorsement. This flexibility allows franchisees to tag

celebrities or personalities that suit their market.

"They could have their own stars to be affiliated with," Matalon said.