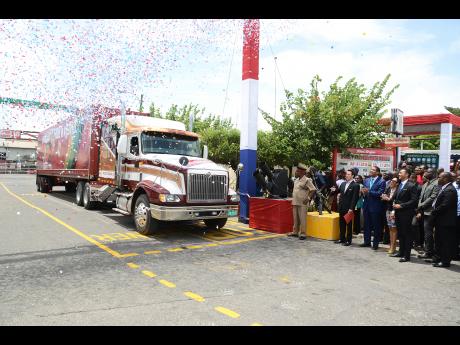 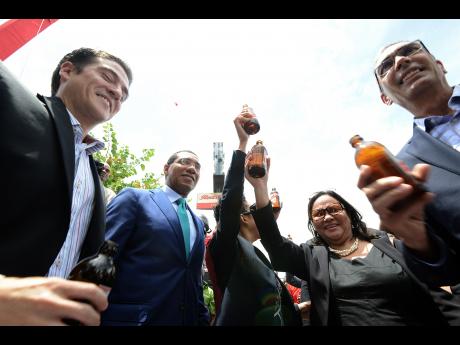 The eighteen-wheeler Willie's Transport big rig had a 40-foot container with about 1,200 cases of beer.

When it moved to the dispatch line to the live strains of Freddy McGregor's Big Ship song, it signalled the restart of Jamaican-manufactured Red Stripe beer exports to the United States after a four-year hiatus.

The container on show during a formal ceremony to mark the resumption of exports was part of a consignment of eight loaded with about 9,600 cases.

"We mean to supply the world with this amazing, high-quality, great, iconic beer. It is iconic; it is what is good about Jamaica. It helps us remind of what's good about life. It really is synonymous about Jamaica - proud, full of confidence, full of potential; and a constant reminder to enjoy life," said the Mexican beer executive who was tapped by the Netherlands-based owner of the Jamaican brewery to head the operation last November.

Red Stripe had stopped export production of beer for the United States and United Kingdom markets in 2012. The then Diageo-owned company had been losing confirmed estimates of around $500 million annually on local production for exports.

Brewing for the US market was outsourced to City Brewing in Latrobe, Pennsylvania. Diageo and City Brewing were later slapped with a class action lawsuit that they were 'passing off' a US-brewed beer as a Jamaican product. The suit was thrown out.

Byles told the Financial Gleaner that from as far back as 2013, himself and former Managing Director of Red Stripe Cedric Blair and CFO Bruce Kidner worked on a project to look at the costing of beer production to ensure it was competitive with what was being brewed in the United States.

"It is testament to the macro-policies and to the efficiencies in the plant that when we did that piece of mathematics, it turned out that producing beer in Jamaica and shipping it to the US was as economical as producing it in the United States," Byles said.

He said the question of where US-bound Red Stripe beer was produced always had to do with the numbers.

"That was the basis of the decision. We always wanted to bring this beer back home, but we didn't want to lose half-a-billion dollars, which is what we were losing before we repatriated. We can say now with confidence that we will be producing the beer, and we will be making profit by exporting it," Byles said.

Nuncio said $6 billion worth of improvements were implemented to make the export drive possible. He said 90 per cent of Red Stripe Jamaica's energy needs is supplied by a cogeneration plant; that the bottling line has been upgraded; and a new packaging line installed.

Nuncio says Red Stripe plans to use the new level of efficiency to develop other markets.

"We've been able to open new markets for the brand. This year, we've been able to introduce Red Stripe to Australia, Dubai, and to Brazil, and in the pipeline for next year, we have incredible markets with huge potential like New Zealand, Costa Rica, Mexico, Italy, France, Germany, and even Russia," he said.

Red Stripe is one of 10 brands that parent company Heineken has targeted for special development.

The impact of the import substitution effort, Project Grow, was also highlighted at the ceremony.

Nuncio said that by year end Red Stripe will expand the acreage under cassava cultivation to 1,000, up from the initial 300 acres, with more to come next year. Byles noted that the substitution project was all about nationalisation and not economics.

"Cassava is really price-neutral to us. There is no advantage to it from a price point of view, but from a national point of view, from the point of view of building an economy and making Red Stripe's roots in Jamaica stronger, it's important, and that is why we are really fully behind it," he said.

Holness said the Government would deepen the partnership with Red Stripe by making lands available for cassava cultivation under Project Grow.