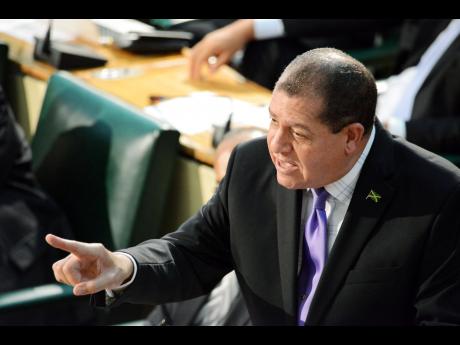 Minister of Finance Audley Shaw now has one more piece of technology to combat the corruption that he describes as "moving somewhere from endemic to epidemic".

The Finance Ministry has been gifted a holographic machine to be used to protect official documents signed by the minister against the possibility of fraud.

The bespoke machine, estimated to cost about US$10,000, will be used to apply security features to ministerial documents that would normally be passed between the Ministry of Finance and various agencies such as the Bank of Jamaica and the Jamaica Customs Agency, among others.

Shaw, in accepting the gift from Mid-Atlantic Investments & Mobility Technologies, a company based in Ghana, said he regretted that the ministry did not have use of the facility sooner.

"There is still a case in court today where my signature was fraudulently used between the ministry and Customs. Waivers were granted left, right, and centre, and this minister didn't sign it," said Shaw.

"Perhaps if I had my hologram I wouldn't have been subjected to the need to write a statement to the court," he said.

Mid-Atlantic Investments made the presentation to Shaw on Thursday at the AmCham Jamaica President's Breakfast forum in New Kingston.

Holographic technology to protect documents and cards has been around for the past 20 years. The technology is featured on passports, visas, credit cards, and Jamaica's Elector Registration Card.

He said the machine was specifically developed for Jamaica's Ministry of Finance.

"These are bespoke machines that are built to order. The minister would have told us his specifications, so the pricing is dependent on the sort of specifications required by the client," Boateng said as he estimated the total cost of the gift.

He said that while the technology has been around for some time, his company has found a way to use it such that fraud and duplication are eliminated.

Boateng, a Ghanaian national who was trained in accounting in the United Kingdom, said he developed the machine after returning to his home country.

"When I returned to Ghana and introduced this machine, not only did I enhance the government's revenue and give back to my country, but I have done a lot for Africa as well. We introduced it to all over Africa, across the Middle East, and to Eastern Europe as well," he said.

Then a year ago, on a visit to Montego Bay, Boateng said he decided to expand distribution further to Jamaica.

The introduction and subsequent linkages between Mid-Atlantic Investments & Mobility Technologies and the Ministry of Finance were facilitated by the American Chamber of Commerce of Jamaica.